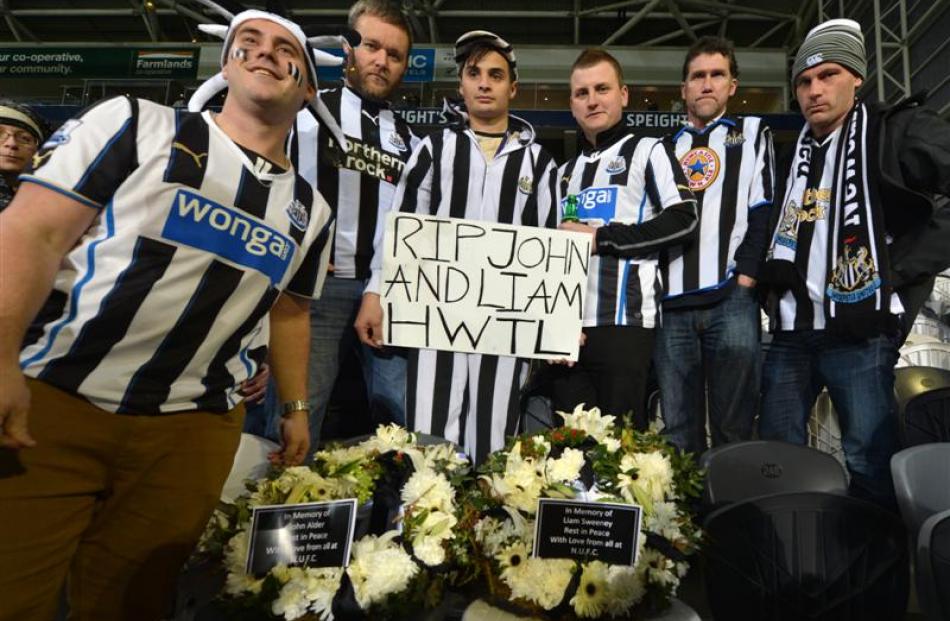 Two empty seats stood out in the sea of black and white.

They were waiting for men from the other side of the world, who never arrived.

Instead, photographs of John Alder, of Gateshead, and Liam Sweeney, of Newcastle, looked out from seats F 244 and F 245 in the Forsyth Barr Stadium South Stand last night.

The friends, on the adventure of a lifetime to support their beloved Newcastle United in faraway New Zealand, died when Malaysia Airlines flight MH17 was shot out of the sky over Ukraine last Friday.

A large black and white banner, which read ''RIP John and Liam'', was strapped across the front of the Mitre 10 Mega Stand.

Mr Alder (63) and Mr Sweeney (28) may never have got to see their club play in Dunedin but Newcastle players, management and fans are determined they will never be forgotten.

As Dunedin rose yesterday morning, hundreds of Newcastle fans were leaving a memorial service half a world away at St James Park, in England.

A poem read at the service, Loyal to the End, could have been penned in Dunedin last night.

Two empty spaces in the crowd,

The tragic news was sad and dark,

But you'll be the light at St James Park.

In the stand, Newcastle-born Ian Heron, of Melbourne, wrapped black tape around fans' arms as they arrived.

''We want to honour them the way they honoured the team. It's what football's all about,'' Mr Heron said.

The Newcastle players ran on to the pitch wearing tracksuit tops bearing the legend ''In Memory of John and Liam'', and black armbands.

There was disappointment, though, among the crowd of about 10,000 that the team wore its muted grey strip, rather than its traditional black and white.

At the 28th minute, an image of Mr Sweeney appeared on the big screens, in tribute to his age.

Mr Alder was similarly acknowledged in the 63rd minute.

''He was a legend, who was in the Newcastle United supporters' hall of fame. Everyone knew him,'' Geordie Scotty Boyd, of Auckland, said.

''He missed one game in 40 years. In any form of life, to be that passionate about something is unreal,'' Malcolm Baxter, formerly of Wallsend, now Christchurch, said.

Mr Sweeney was remembered as a popular identity.

''He was a really nice guy. He was quite a quiet guy, except on Saturdays,'' Danielle Sutcliffe, formerly of Newcastle, now Dunedin, said.

Newcastle United has dedicated its 2014-15 Premier League season to the two men.