Pokies grants of $141m to NZ rugby in past six years 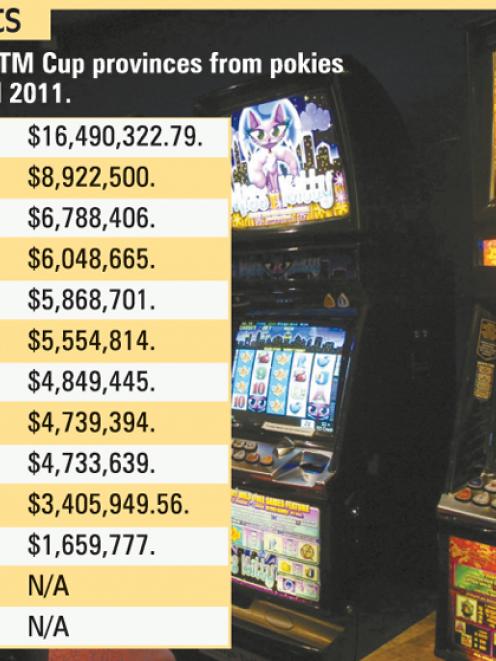 Rugby was granted more than $141 million in pokies grants over the past six years, raising questions over the sustainability of the country's national game.

The lion's share of that amount was granted to the major rugby unions - those that field teams in the ITM Cup - while about $5 million was granted to individual rugby clubs.

Last year, more than $23 million in pokies grants went to rugby interests. The Waikato Rugby Union led the way with $4.12 million, followed by the Auckland Rugby Union with $2.2 million.

Figures released to the Otago Daily Times show that between 2006 and 2011, the Otago Rugby Football Union received and then distributed $5.8 million in pokies grants - including $1.38 million in 2007 alone.

ORFU chairman Wayne Graham told a media conference on Monday night the professional game was "running $700,000 to $800,000 over what we could afford".

"In hindsight, we were spending based on last year's revenue, and that revenue was not there."

Those funding shortfalls included $200,000 less in pokies grants than was budgeted for, he said.

Yesterday, Mr Graham said the funds were granted to amateur rugby only - such as for school competition, or age-group teams - and did not go to professional sport.

The union might not have been as successful at applying for grants when compared with other unions, and had budgeted about $800,000 for pokies grants.

The drop in pokies revenue was the biggest shortfall for the union and was based on "incorrect revenue projections".

The ORFU had two grant requests outstanding. It would lose those grants if it ceased to be an entity, and also have to return any unused grants.

The Department of Internal Affairs stipulates that pokies grants can be given only to a sport that is entirely amateur.

Rugby sources yesterday questioned how much funding was returned from the unions to grassroots rugby, given most clubs could also apply for their own grants and had their own fundraising initiatives.

Problem Gambling Foundation chief executive Graeme Ramsey said that under the Gambling Act, grants were made only to "authorised purposes", such as charitable purposes or horse-racing stakes.

"What we know is professional sport is not a charitable purpose." He called into question the ORFU's budgeting for pokies grants.

"Until recently, grants had to be annual, and societies could not make a commitment to long-term funding. I think it is interesting you can actually budget on pokies grants."

The ORFU did not itemise pokies grants in its financial statements, but listed grants along with sponsorship, royalties and donations.