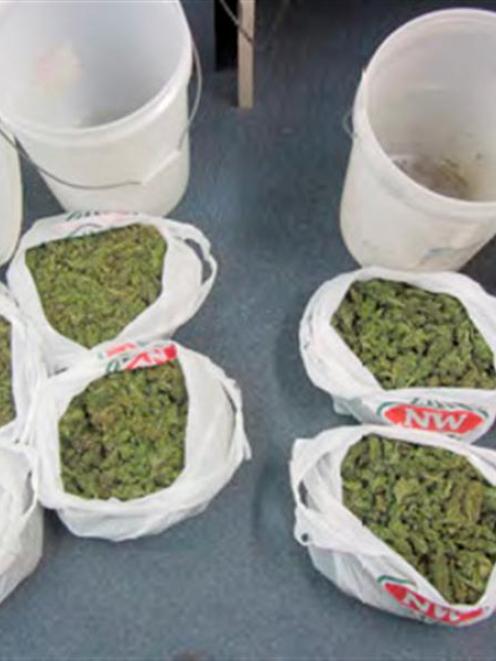 Some of the 8kg of cannabis worth an estimated $98,000 seized by Dunedin police during a four-month investigation. Photo supplied.
Almost 8kg of dried cannabis, worth up to $98,000, may count as evidence against 10 people arrested yesterday in relation to a Dunedin-led police investigation.

The four-month operation focused on Dunedin members of the Mongrel Mob Notorious gang and involved the execution of 15 search warrants in Dunedin, Ashburton, Wellington and the West Coast town of Blackball.

Five of the men arrested are from Dunedin, four are from the West Coast and another is from West Otago.

At least 24 charges will be laid against the six people arrested in Dunedin, all male Mongrel Mob members.

Korrey Teeati Cook (36) was the only one to appear in the Dunedin District Court yesterday.

He was remanded in custody by consent to May 22 on joint charges of dishonestly converting $20,000 of trust money, conspiring to pervert the course of justice by interfering with Crown witnesses and, with several others, possessing and conspiring to sell or supply cannabis.

The five others were granted registrar's adjournments and bailed to May 22.

Kapa and Te Whaiti are also jointly charged with Cook and Mason James Purvis (19), painter, with possessing and conspiring to sell cannabis.

Paora Kake Phillips (29) forest worker, of Tapanui, was jointly charged with Cook in relation to allegedly interfering with Crown witnesses.

A seventh man, named as an alleged co-offender, has yet to be charged.

Southern district crime services manager Detective Inspector Steve McGregor said others arrested in the investigation would face at least six charges and appear in court in Greymouth. Police were still trying to find another person, and further charges were possible.

Charges of criminally breaching trust related to the alleged misuse of $20,000 from a charitable trust linked to government funding.

Det Insp McGregor would not disclose further information about the alleged offending as it forms evidence before the court.

He said by targeting key individuals in the Mongrel Mob Notorious gang's hierarchy, police hoped to reduce its ability to keep offending.

A previous operation resulted in jail terms for some of Dunedin's Mongrel Mob Aotearoa members.

Police would continue to target locally-based criminal groups and individuals dealing in drugs, as well as share information nationally to help those targeting gangs in other areas, Det Insp McGregor said.

"We believe there will be a significant impact initially as a result of this operation, but that does not mean we believe the problem has been eliminated. It remains a focus," he said.

Dunedin police were determining whether such a large amount of cannabis had ever been seized locally in a single operation.

A small sample of the drug was laboratory-tested but the remainder was destroyed, Det Insp McGregor said.

The investigation comprised about 20 core staff members and up to 30 officers were involved in executing search warrants around Dunedin yesterday.

"This investigation has been about coming down hard and targeting the criminal element in our communities," Det Insp McGregor said.

It followed a similar operation targeting the supply of illegal drugs into Queenstown, which resulted in the arrest of five people and discovery of a clandestine methamphetamine laboratory in Auckland.

More than 500 cannabis plants in Southland and Otago have been found by police in the 2011-12 growing season.