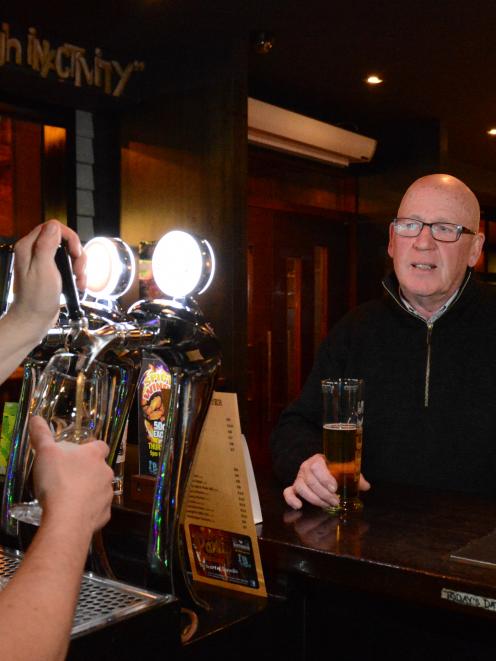 Duty manager Mike Campbell pours a beer as he talks to Ellis Hospitality Group managing director Barry Ellis, of Queenstown, at the Innocent Bystander bar in the Octagon, Dunedin, last night. Photo: Linda Robertson
The Dunedin City Council does not want to be the ''fun police'' but is prepared for a legal battle to defend its new approach to alcohol in the city.

The council yesterday finally unveiled its provisional local alcohol policy (Lap), which dropped the toughest restrictions on bars and instead turned up the heat on off-licence sales from supermarkets and bottle stores.

The policy - to be considered by councillors next week - would limit alcohol sales from supermarkets and other off-licence retailers to between 9am and 9pm.

That was a change from the hours of 7am to 11pm permitted under existing rules, and also tougher than the restricted 7am to 10pm hours suggested when an earlier draft policy was released last year.

The policy now also proposed a moratorium on new off-licences in North Dunedin, although specialist wine stores and breweries selling their own product would be excluded.

Inner-city bar owners would still have a 3am closing time, one hour earlier than now. However, ''genuine'' entertainment venues would be permitted to stay open one hour later, until 4am, if they offered live entertainment, charged for entry and implemented a one-way door policy from 2.30am.

Earlier plans for a 1am one-way door policy had also been eased back for other venues. A 2.30am start time was now proposed, while other tough restrictions had been dropped. Those included closing outdoor areas from 11pm, and banning the sale of shots after midnight.

Council services and development general manager Simon Pickford said the changes showed the hearings committee had listened, after being inundated with 4262 submissions mostly opposed to the earlier draft.

The new policy sought to balance the need to reduce alcohol-related harm and maintain the city's vibrancy, including its entertainment venues, he said.

Some earlier suggestions were ''quite clearly not going to work'', but the new policy contained nothing ''particularly radical'', he said.

While the council was taking a tougher line on supermarkets and other off-licence alcohol retailers, the reduced hours were consistent with other cities' policies and not ''draconian'', he believed.

It was hoped an appeal leading to a potentially-expensive legal battle could be avoided, ''but if it happens we will deal with it'', Mr Pickford said.

''We are hopeful the supermarkets will see it as a reasonable compromise.''

Foodstuffs New Zealand and Progressive Enterprises both said when contacted last night they would review the changes before making any comment.

Whether an appeal followed was yet to be seen, ''but it's fair to say others around the country have been appealed'', he said.

Prof Doug Sellman, of the National Addictions Centre, took an opposing view to that of the industry - praising the ''excellent decision'' to restrict off-licence hours.

That would reduce ''impulsive intoxicated purchase of alcohol'' at night, and could also help reduce pre-loading, he said.

''It makes you wonder why the Government didn't bring in these more civilised hours as default hours in the first place, rather than leave councils up and down the country to have to take on the alcohol industry and spend huge amounts of money on consultation and, in some cases, court costs for the sake of safer and healthier communities.''

Dunedin inner-city licensee forum spokesman Richard Newcombe could not be contacted last night, but other bar owners also expressed support for the changes.

He predicted it would be appealed by health authorities or police, but the industry would be less likely to unless ''fishhooks'' emerged.

''I think that's pretty reasonable and fair to the industry and to the public.''

His brother, Barry, agreed there were ''a lot of positives'' in the new policy, particularly the decision to abandon the 11pm closing of outdoor areas and scrap the prohibition on shots after midnight.

''There's some positives there for everybody.''

Terrace Bar owner John MacDonald said he was also happy with the ''quite significant'' compromises, although venues targeting a later-night clientele might feel differently.

''I would imagine the majority of businesses would be pretty happy with those compromises, in terms of bars.''

He still questioned the merit of a one-way door policy starting just 30 minutes before 3am closing, and said off-licence businesses would feel differently.

''I'm not sure what will happen now ... but at least there has been some concessions made.''

The policy would be considered by councillors at Monday's full council meeting.

If it was approved, submitters would have 30 days to lodge an appeal, before the policy came into force.