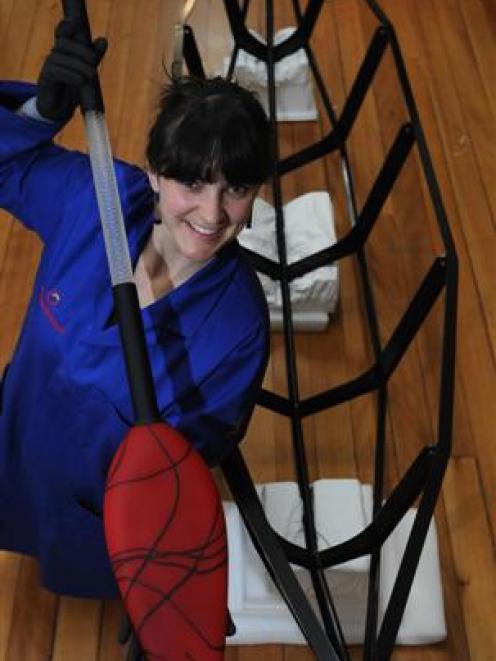 Otago Museum design services co-ordinator Rebecca McMaster takes a closer look at a glass paddle and canoe, created by artist Luke Jacomb. Photo by Peter McIntosh.
Wherever Auckland glass artist Luke Jacomb travels next on his creative journey, there is a good chance a rather special canoe will be coming with him, at least part of the way.

Auckland-born Jacomb (33), developed his glass art in the United States for eight years, living in Seattle and New York, before returning to Auckland in 2009.

His work has previously been shown in more than 20 exhibitions in the United States, Denmark and New Zealand.

The 99 works in the Dunedin show take part of their inspiration from Polynesian object forms, including interpretations of canoe paddles and fish traps.

The show's centrepiece is a canoe, 3m long, constructed from panels of blown glass.

Mr Jacomb said the canoe involved "a labyrinth of technical difficulties" and was by far the most difficult object he had made.

He used a new version of reticello, a traditional Venetian glassblowing technique, to create complex coloured patterns in the glass.

A friend had inspired him to make the canoe by reminding him how many canoe paddles he had created and asking, laughingly, where the canoe was.

He was "seriously impressed" by the faith Otago Museum organisers had shown in him two years ago, by offering to host his first New Zealand solo show.

"I just love to blow glass. That's what I want to do all the time."