It was an emotional moment for Wanaka woman Mary Gray when she saw, for the first time, items her grandfather had found concealed in rocks near Hyde, 124 years ago.

There had always been family stories about what Robert Mathewson discovered in a rock fissure in 1894, Mrs Gray said. But what they looked like and what had become of them was a mystery, until her research into the Mathewson family history led her to focus on the items. 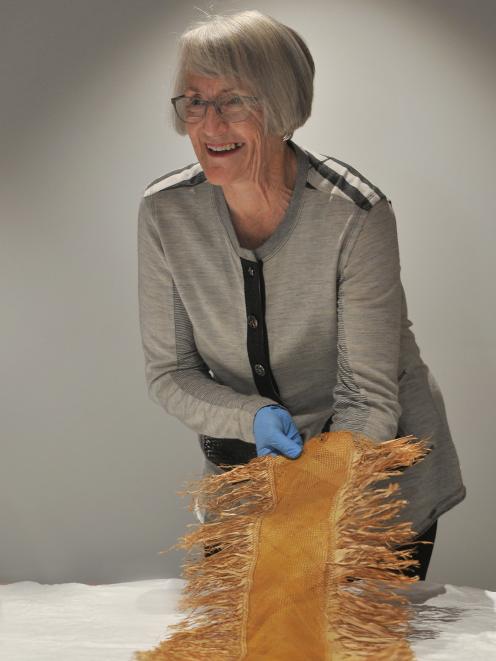 Mary Gray has her first view of Polynesian textile items found by her grandfather in a cave near Hyde in 1894, and now returned to the Otago Museum. Photo: Christine O'Connor

Two years ago, she started "a determined search" to find them and have them returned to Otago.

"To have them back in Otago, where they first came to light, and to actually see them for myself, is incredibly exciting. I feel very emotional," Mrs Gray said yesterday as Otago Museum curator Lisa Yeats carefully unwrapped a delicately woven kete, two hanks of very fine cord, three maro (waistcloths) and a delicate piece of bark cloth.

When Mrs Gray finally found the items - which had somehow gone from Otago Museum, to Wellington and then Auckland - she was asked whether the family wanted them back.

"I told them ‘No’, that I felt very strongly they should be returned to Otago because that’s where they were found."

So she was "incredibly excited" when she learned they were being returned to Otago Museum from Te Papa earlier this year.

"The only thing that mattered to me was getting them back to Otago.

"I really felt I was honouring the memory of my grandfather, whom I never knew. He was drowned at Warrington during a Christmas holiday while still a young man.

"He always intended presenting the items to the Otago Museum, so I am honouring his wishes," Mrs Gray said.

But where the items were from and how they ended up "in a cave at Strath Taieri" remained a mystery.

The material and workmanship suggest a Polynesian/Pasifika origin, rather than Maori.

Two years after the discovery was reported, ethnologist August Hamilton, registrar of the University of Otago, speculated the items were of Samoan origin and the whole group might have been acquired from one of the early whaling ships by an individual who, for some unknown reason, had been unable to return to the place where they had been left.

Otago Museum curator, humanities, Moira White said the museum was "delighted" to accept the items into the museum’s collection "so we can examine them, share in the speculation of their origin, and assess their condition, with a view to possibly displaying them in the future".