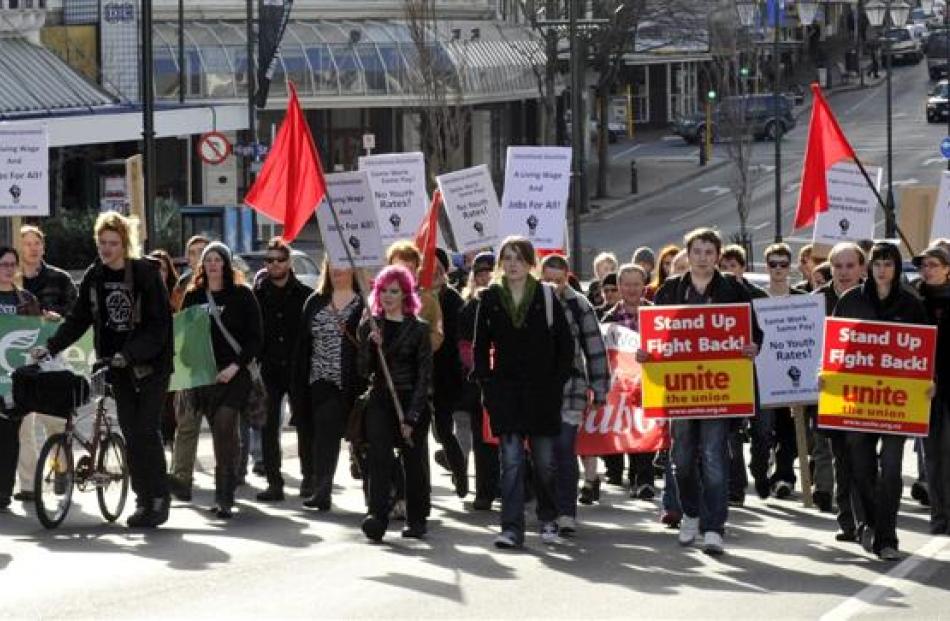 A protest rally marches on Princes St, Dunedin, on Saturday, in opposition to the possible reintroduction of youth rates for young workers. Photo by Gerard O'Brien.

About 120 people marched in Dunedin on Saturday in protest against the possible reintroduction of youth rates in New Zealand.

The protest was organised by what spokesman Malcolm Dean said was a loose coalition that included the Unite union, International Socialists, the Green Party, and the Aotearoa Workers Solidarity Movement.

In a press release, the group demanded the "complete abolition" of youth rates, and an immediate increase in the minimum wage to $15 an hour, to "reflect the sky-rocketing cost of living".

The last Labour government ditched youth rates, with some exceptions around trainees and young workers starting out, and said the minimum wage should apply to all workers from 16 years-old.

Act New Zealand has argued the minimum wage stopped employers taking on young workers and, in March, the Government ruled out supporting a Bill introduced to Parliament by Act MP Sir Roger Douglas seeking to allow the reintroduction of youth rates.

But Prime Minister John Key this month indicated National would campaign on further changes to labour laws, and did not rule out reinstating a youth minimum wage.

The protest assembled in the Octagon, for speeches, before marching to Dunedin National list MP Michael Woodhouse's electorate office in Princes St.