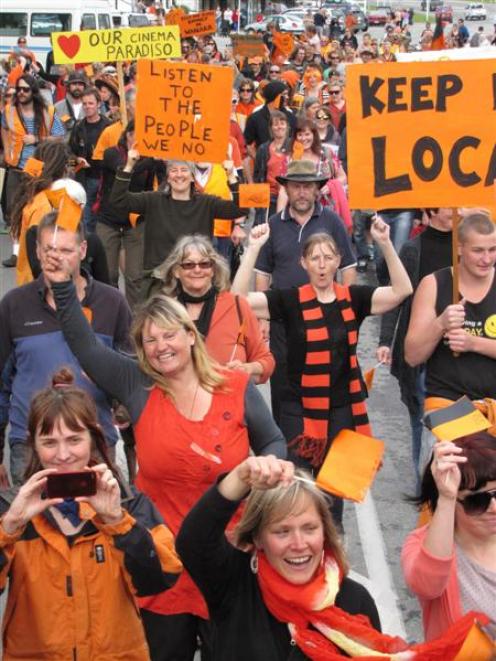 Some of the estimated 250-300 people in the Wastebusters protest march in Wanaka.
About 300 people marched in support of Wanaka Wastebusters yesterday afternoon, after the organisation's loss of a recycling contract with the Queenstown Lakes District Council.

Many protesters were clad in orange and black, the Wastebusters colours.

The council's infrastructure and services committee awarded the annual contract for kerbside recycling collections and processing to Auckland-based Smart Environmental Ltd earlier this week. The price was $301,400 (plus $61,200 in the first year to pay for additional crates).

Two other tenders, including a $575,649 bid by present contractor Wanaka Wastebusters, were rejected. 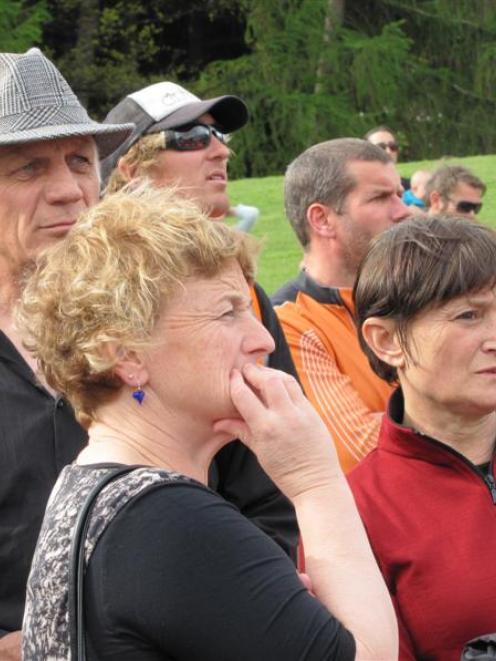 QLDC deputy mayor Lyal Cocks (with hat), Mayor Vanessa van Uden and CEO Debra Lawson (in red) listen to the Wastebusters' protest speeches last night.
The decision outraged Wastebusters supporters and raised fears some of the 30 staff employed by the charitable trust might lose their jobs.

Wastebusters manager Sue Coutts said: "They [the council] need to man up and admit the decision takes us in the wrong direction."

The protest was attended by Mayor Vanessa Van Uden, chief executive Debra Lawson and Wanaka Community Board chairman Lyal Cocks, but there was not enough time for them to respond to the speeches by Ms Coutts and Cinema Paradiso owner Calum MacLeod.

Cr Cocks was concerned the protest would delay the Kahu Youth Wanakafest parade through town.

He said afterwards he was "always keen to hear from the community, so it was good to hear the views of this group. The parade was great, so well done to Kahu Youth and, in particular, [youth worker] Richard Elvey for making it happen." 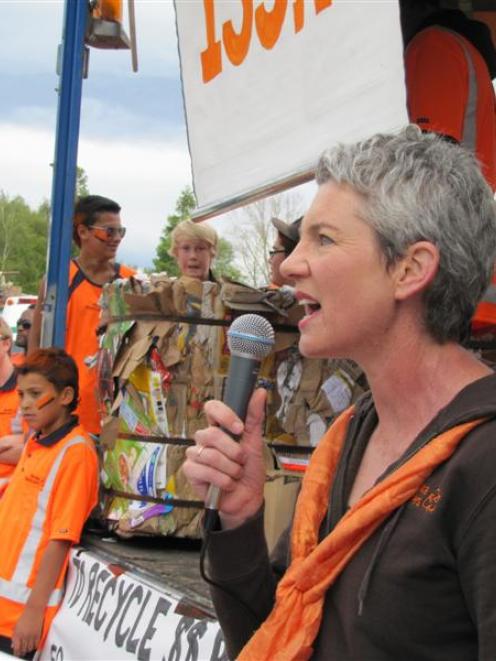 Wastebusters manager Sue Coutts speaks at the protest. Photos by Marjorie Cook.
Wanaka Residents Association chairman Graham Dickson said the group had resolved on Thursday to write to the council expressing concerns about the recycling services tender process and the lack of community consultation.

"We feel the process doesn't fit with community values. The council makes noises about being inclusive, cheering for the community, being sustainable and looking to the future, and they appear to have made their decision on a purely accounting basis.

"We have some concerns there should be values, other than just dollars, built into the process."

"The only thing that should have been compared is the tender bids."

The community association queried how the new contractor could operate sustainably for such a low cost.

It felt the community should have been consulted about the recycling contract, given the high value placed on Wanaka Wastebusters' work, Mr Dickson said.

"In the past, when we set up the recycling centre, the community was strongly behind it, even though it did cost money.

"In the past, where we had the opportunity for community input, the cost wasn't the only criteria," Mr Dickson, a former Wanaka Community Board member said.