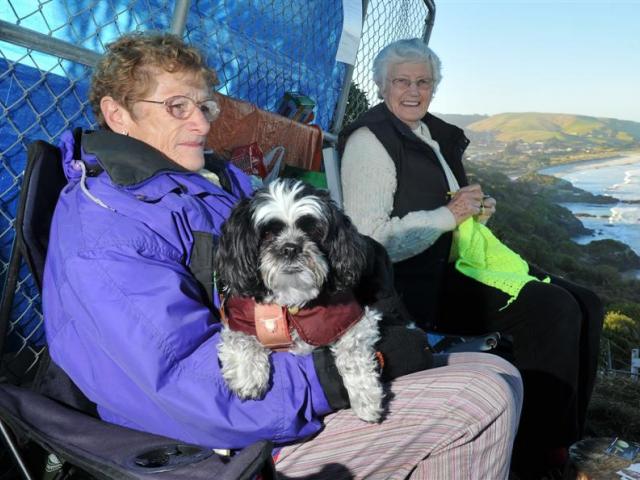 Two first-time protesters are making the most of a ''disgusting'' situation.

Sam Sharpe has some strong views on the issue of abortion, and on the anti-abortion campaigners who assemble at Dunedin Hospital every Friday.

Anti-capitalism protesters camping in the Octagon refused a Dunedin City Council request to leave yesterday and say they may remain for weeks.

A mock funeral procession filed from the University of Otago to the Octagon in Dunedin yesterday, in a bid to raise awareness of "fossil fuel addiction".

The Octagon site taken over by Occupy Dunedin will remain under "ongoing review", with no promises from the Dunedin City Council protesters will not be moved on.

About 300 people marched in support of Wanaka Wastebusters yesterday afternoon, after the organisation's loss of a recycling contract with the Queenstown Lakes District Council.
A banner hung from a Dunedin bridge yesterday morning was part of a national Greenpeace effort to change Sealord's tuna-fishing practices.

Hundreds of men, women and children marched into the Octagon on Saturday in the Rape Crisis "Slutwalk" crusade against sexual violence.

The message of playcentre being a high-quality education option for parents, which was worthy of community and Government support, rang loud and clear through the Octagon, Dunedin, yesterday.

About 120 people marched in Dunedin on Saturday in protest against the possible reintroduction of youth rates in New Zealand.

A giant postcard is on its way to New Zealand Post chief executive Brian Roche, as the campaign continues to save the Dunedin Post Shop in the Exchange before its closure on June 23.

Hillside Workshop employees will launch a publicity campaign alongside the Rail and Maritime Transport Union to garner support for a bid to try to overturn a KiwiRail decision to cut 40 jobs at the South Dunedin engineering "institution".

It might have been freezing, but smearing themselves with a mixture of vegetable oil and molasses and plunging into the ocean at Moeraki yesterday was worth it for a group of deep-sea oil-drilling protesters.

About 1000 people packed the Octagon, in Dunedin, on Saturday, to give the Government the clear message that cuts to early childhood education were not a popular move.

Fee increases, staffing changes, longer hours, and revenue building are on the mind of early childhood education (ECE) providers and parents as funding cuts to the sector begin to hit home.

Police used tear gas and water cannon against rampaging youth in Lyon while the French government showed its muscle in parliament, short-circuiting tense Senate debate on a bill raising the retirement age to 62.