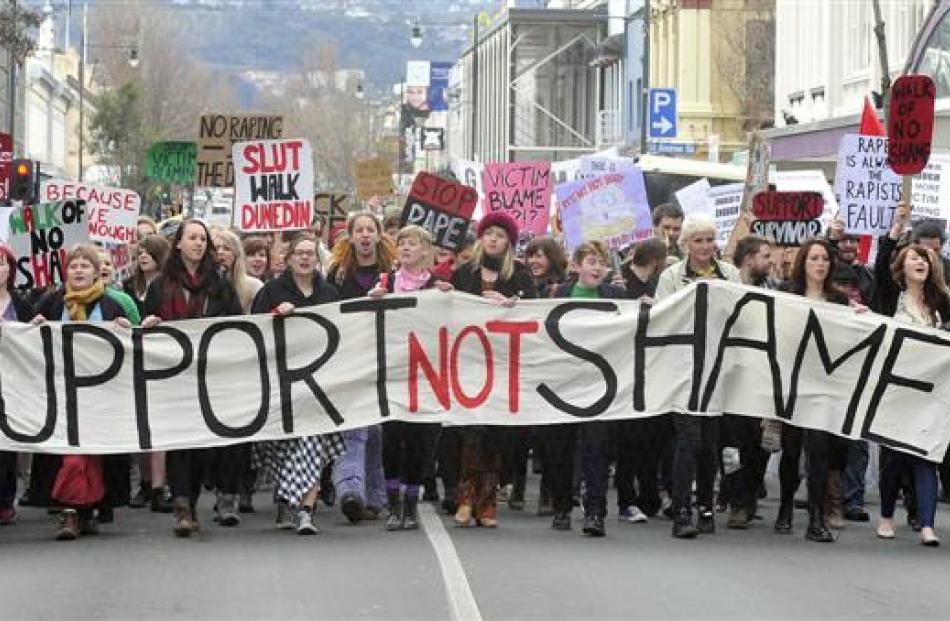 Hundreds of men, women and children marched into the Octagon on Saturday in the Rape Crisis "Slutwalk" crusade against sexual violence.

"Everywhere. Where we go. Yes means yes and no means no," the crowd chanted as it marched from the Otago Museum reserve and along George St to the Octagon.

Many of the marchers carried placards protesting against rape and domestic violence.

Dunedin South MP Clare Curran told a 400-strong crowd in the Octagon she was a victim of sexual abuse.

"I was 23 and walking home from work when I got assaulted. I was lucky and managed to fight off the offender. But it affected me for years afterwards. It affected my confidence," she said.

The march was billed as the "Slutwalk" and many of the crowd, both male and female, had dressed provocatively, in support of the right to wear whatever one chooses and in defiance of archaic stereotypes.

"Victim-blaming is far too common in our community. The event is a good way to raise awareness and challenge damaging ideas around rape," Dunedin Rape Crisis community educator Georgia Knowles said.

"The focus of the 'Slutwalk' is to emphasise a person's right to be free from violence, regardless of what they wear or how they act."

One in three females and one in six males were sexually abused before the age of 18, she said.

"We're really pleased with the turnout. It shows how diverse this issue is. Rape can and does happen to anyone of any age, sex or ethnicity."