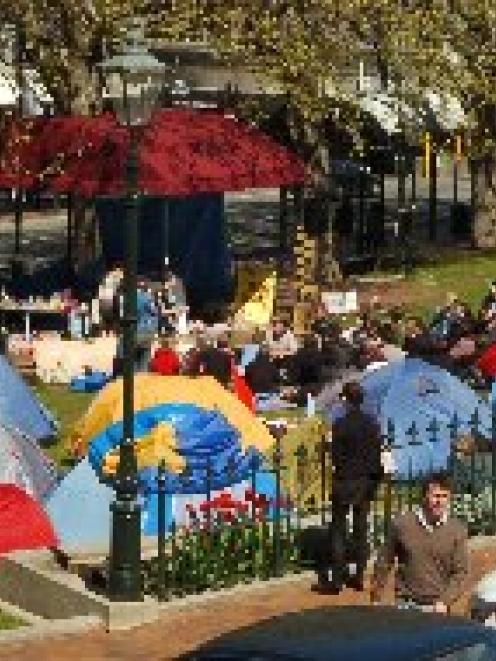 Protesters' tents in the Octagon yesterday. Photo: Jane Dawber
Anti-capitalism protesters camping in the Octagon refused a Dunedin City Council request to leave yesterday and say they may remain for weeks.

The "Occupy Dunedin" protest took over the upper Octagon on Saturday.

More than 100 protesters and about 30 tents were still in place late last night.

A council-contracted security firm employee asked protesters to leave about 2.30pm but the group was defiant, and some implored the worker to join the protest, which purports to represent 99% of society against the wealthiest 1%.

This prompted "passive resistance workshops" to practise the response to any police intervention.

Leaders dispensed advice about what to do if arrested.

Protesters said the Bill of Rights guaranteed their rights, over and above local bylaws.

Protester Abe Gray, of Dunedin, said the council recently publicised a 19th-century bylaw which allowed immigrants headed for the goldfields to camp in the Octagon.

At the time - during the 150th Otago gold rush celebration in March - the council told the Otago Daily Times the bylaw had "never been repealed".

Protester Lauren Kiff, of Invercargill, who went to Dunedin Central Police Station immediately after the security worker's visit, said an officer advised that protesters did not have permission to camp in the Octagon, and if the council complained, the protesters would be moved on, using force if necessary.

Protesters were late last evening settling down in their tents for a second night.

One group member said the Octagon occupation could continue for days or even weeks.

Contacted late yesterday afternoon, community and recreation services manager Mick Reece, told the Otago Daily Times the council had not requested police help, but planned to, since the protesters had not responded to the request to leave.

Protesters had not "booked" the upper Octagon, and "they can't just turn up and occupy the Octagon", he said.

The protesters infringed a bylaw prohibiting camping on a reserve, and the council had received complaints about the camp.

He had "no idea" about the 19th-century bylaw.

"They may want to check up on that, because the one that I understand is about putting structures and so forth in the Octagon and occupying the Octagon."

"Giving people permission to camp or sleep or live in the Octagon - I'm aware of no law that allows that," Mr Reece said.

"It's certainly not the understanding we have.

"It's not the understanding the police have."

When contacted, council governance manager Sandy Graham said if any such ruling existed, it would be a central government statute, not a local bylaw.

She was not sure, but the Octagon was legally "tricksy", with some "old, old statutes" still on the books.

Senior Sergeant Bruce Ross said the police would act only once the council complained.

Snr Sgt Ross said it appeared police had not fielded any complaints about the protests.

The Dunedin action was one of many worldwide, as the "Occupy Wall Street" movement in the United States spread at the weekend.

In New Zealand, there were other protests in Auckland, New Plymouth, Wellington, Christchurch, and Invercargill.