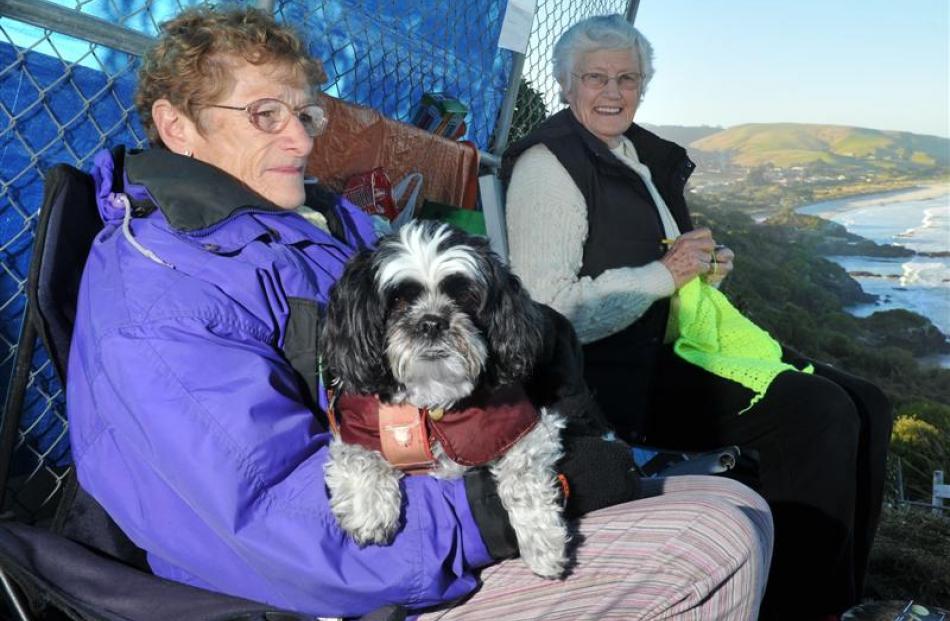 Two first-time protesters are making the most of a ''disgusting'' situation.

Mrs McGregor had lived in Brighton for 46 years, including 20 years in her current house, which is about 100m from the site. Her daughter Robin called from Australia on Thursday night to offer her some advice.

''She said to me `Mum, you better not go swearing at anyone while you are there'. I just thought at my age I better come down here while I could.''

Mrs McGregor was the oldest protester so far and said the demonstration had brought the community together.

''It's been very, very good for the area. Despite this stupid pole it's brought people together. It's been great catching up on bits and pieces going on and the view is just spectacular.''

She brought her dog Penny with her to keep warm and said there was ''more food at the site than you could shake a stick at''.

Mrs Leslie, a Brighton resident for the past 23 years, said the protest had been a lot of fun so far.

''I'm spending my time here knitting and enjoying the company. You meet all sorts of people. I didn't realise so many nice people lived here.''

The occupation of the Scroggs Hill Rd site began on Monday morning, when construction was scheduled to begin. Both Mrs Leslie and Mrs McGregor strongly oppose the tower being built there.

Mrs McGregor said. Mrs Leslie said the cellphone tower, which was scheduled to be built by August 3, would ruin the views and described the situation as ''disgusting''.

A roster was in place to ensure protesters were constantly on site. Both women had already committed to returning next week.