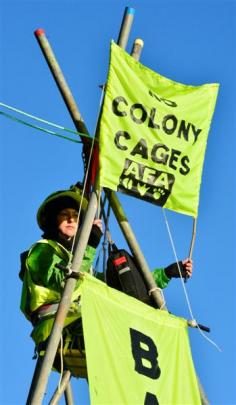 Deirdre Sims sits at the top of a tripod blocking access to Mainland Poultry's battery hen farm at Waikouaiti yesterday in a protest against a new code of welfare for egg-laying hens, which would allow farmers to hold battery hens in colony cages.... 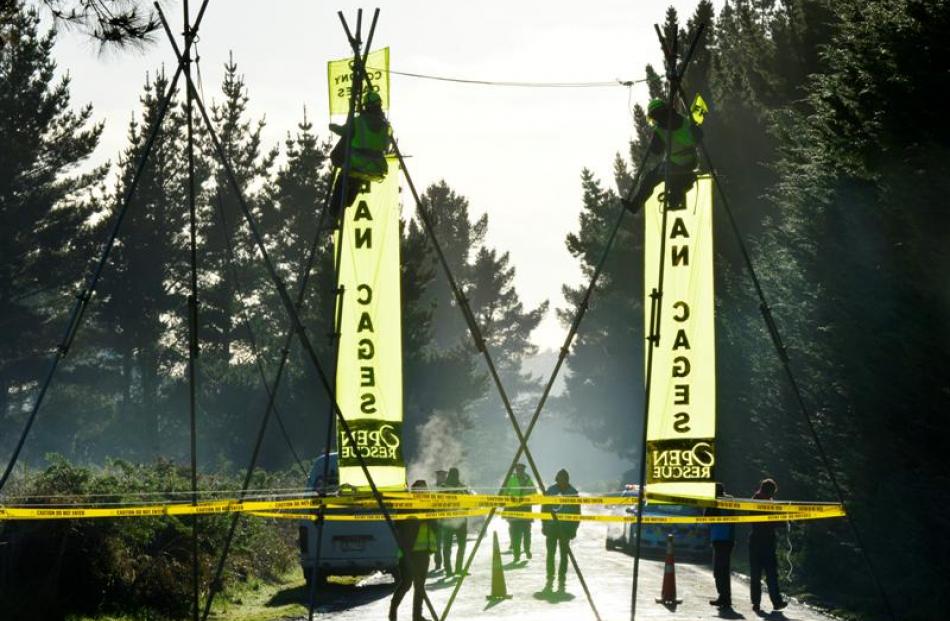 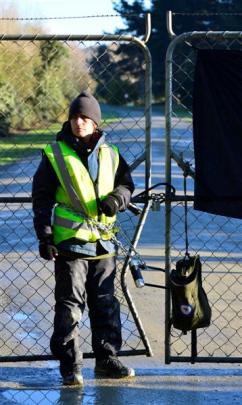 Protester Marie Brittain after padlocking herself to the main entrance gate.

Fifteen people from animal welfare groups Animal Freedom Aotearoa, New Zealand Open Rescue and Safe put up 8m-high tripods made from scaffolding rods across the main access road to the Mainland Poultry farm about 3am.

Police monitored the situation throughout the morning before using a cherry picker to get the two women on the scaffolds down about 1.30pm.

The three women were arrested and charged with obstructing a public way.

Inspector Alistair Dickie said the protesters atop the scaffolds were putting their safety at risk, as strong winds were forecast for the afternoon.

Ms Brittain said the groups were protesting against a new code of welfare for egg-laying hens, which would allow farmers to hold battery hens in "colony cages".

Colony cages were larger than the industry standard but, according to Safe, the cages prevented hens from moving freely and gaining exposure to sunlight.

"Basically, our message is ... if they do go with colony cages, they are making a complete mockery of the Animal Welfare Act," Ms Brittain said.

The protesters were aware they were breaking the law and she was "totally prepared for what will ensue".

Mainland Poultry sales and marketing general manager Hamish Sutherland said the protest had a big effect on the company's transport operations and its ability to feed the livestock.

"The protesters are not aggressive. They are well behaved and we respect that, [but] there is no perfect way of producing eggs," he said.

"In supermarkets, over 75% of eggs bought every week are from caged houses.

"The bottom line is we are sending a message to the egg industry and the Government to ban cages ...

"These birds are not moderately uncomfortable. Their lives are a living hell," Mr Scott said.

The three women were released on bail and will appear in court at a later date.