March to protest cuts to funding 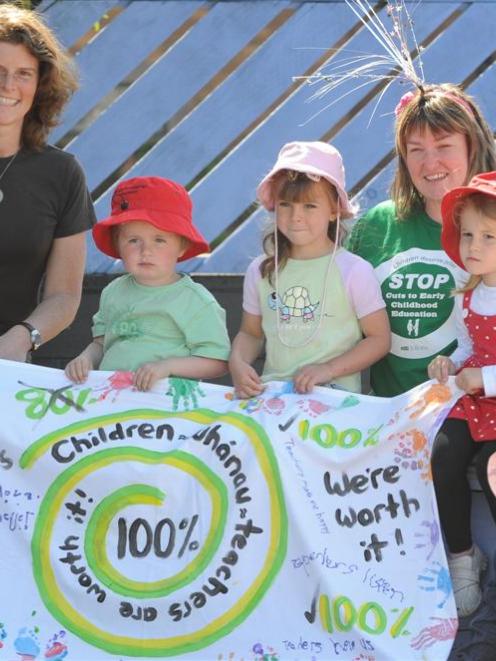 In May's Budget, the Government announced the sector would receive $1.3 billion in annual funding, but $280 million would be saved over four years by reducing the financial incentive for centres to have qualified staff.

The previous government had encouraged ECE providers to have all staff in their centres qualified and they had received subsidies for those staff.

The cut means that from February, funding will only be provided for up to 80% of a centre's qualified staff.

Dunedin Kindergarten Association chairwoman Davina Hunt said this would mean a $1.2 million funding cut for the organisation and its 22 kindergartens, but its dedication to 100% qualified staff would continue.

Ways to increase revenue were now being looked at, including running holiday programmes and extending the year by two days.

Fees will also be increased by 25%, meaning a parent with their child enrolled in the 20 hours scheme will pay $2.50 an hour of care, and others will pay $5 an hour.

Some centres were also changing from a sessional model to a kindergarten day model.

Ms Hunt believed there "would be an uproar" if cuts such as this were made to the primary and secondary school sector.

University of Otago Childcare Association director Kay Lloyd-Jones said the organisation was still deciding how it would progress once the cuts came in.

However, she expected "significant fee increases" would be passed on to parents and there would be a "need to adjust staffing".

The cuts will also be the focus of a march on Saturday.

The Dunedin ECE network, families and the community will march from the University of Otago School of Dentistry to the Octagon, where speeches from MPS, teachers and parents will take place.