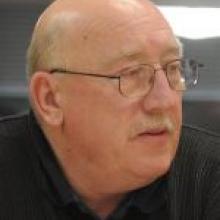 Jim Kelly
Hillside Workshop employees will launch a publicity campaign alongside the Rail and Maritime Transport Union to garner support for a bid to try to overturn a KiwiRail decision to cut 40 jobs at the South Dunedin engineering "institution".

Hillside-employed RMTU national president Jim Kelly said workers will take part in a stopwork meeting this week to plan their campaign, which is expected to include a petition and a protest rally through Dunedin streets.

"We're not going to take this lying down. We're going to fight it," the veteran unionist said yesterday.

Hillside's union delegates are scheduled to meet their KiwiRail bosses this week as negotiations begin about the proposed 40 jobs, which will be cut from the engineering outfit's roster of 172 employees, Mr Kelly said.

The RMTU blames KiwiRail's decision to cut up to 40 jobs at Hillside on the Government-owned company's decision to outsource major rail manufacturing contracts overseas.

Delegates want to view the economic "facts and figures", regarding the costings of Hillside's failed tenders for recent contracts, to compare with successful Chinese tenders for rolling stock wagons and locomotives for the $500 million electrification of Auckland's rail network and 500 new flatdeck wagons, Mr Kelly said.

KiwiRail chief executive Jim Quinn says the Hillside tenders for the flatdeck wagons - to meet increasing customer demands being made on the rail company's ageing stock - were about 20% more expensive than the successful tenders from China manufacturer CNR.

There are no plans in the immediate future to contract further engineering work to Hillside to build flatdeck wagons, despite a KiwiRail "turnaround plan" to source up to 4000 new wagons during the next 10 years, Mr Quinn says.

A union stopwork meeting at Hillside, which is scheduled for Thursday, would be held to "make some decisions about what we can do to get the public in behind us", Mr Kelly said.

Hillside employees would start a petition to campaign for KiwiRail to reverse its decision to cut jobs, with a public rally likely to be organised soon, he said.

"We're wanting as many ideas as possible so we can get the public support to keep these jobs and Dunedin's engineering industry strong," Mr Kelly said.

KiwiRail's decision to cut 70 jobs from its national employee base in design and manufacturing had ominous overtones for the South Dunedin engineering "institution".

"If we don't win here and do something to find more work, then Hillside will close next year. That's a definite," Mr Kelly said.