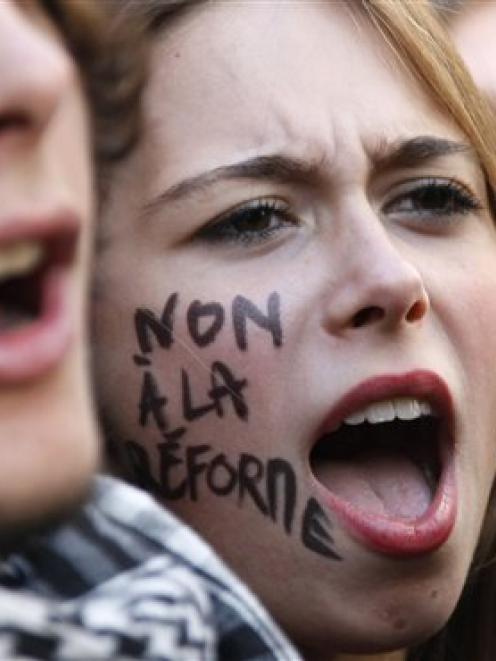 A student shouts slogans during a demonstration in Paris yesterday. (AP Photo/Francois Mori)
Police used tear gas and water cannon against rampaging youth in Lyon while the French government showed its muscle in parliament, short-circuiting tense Senate debate on a bill raising the retirement age to 62.

Despite growing pressure, President Nicolas Sarkozy held firm on a measure he says is crucial to the future of France, heightening the standoff with labour unions that see retirement at 60 as a hard-earned right.

Defiant unions announced two more days of protest, one on November 6 - long after the bill is likely to become law. The bold action suggested that opponents believe they have the power to force the government's hand.

"The government bears full and complete responsibility for the continued mobilisation, given its intransigent attitude, its failure to listen and its repeated provocations," said the statement signed by six unions.

Weeks of protests have left at least a quarter of the nation's gas stations on empty, blocked hundreds of ships at the Mediterranean port of Marseille and even forced Lady Gaga to cancel Paris concerts.

Violence on the margins of student protests have added a new dimension to the volatile mix.

A march in Paris by at least 4,000 students was peaceful, but new violence broke out in Lyon, where police used water cannon and tear gas to hold back rampaging youths hurling bottles and overturning at least one car.

"It is not troublemakers who will have the last word in a democracy," Sarkozy told local officials in central France, promising to find and punish rioters. He accused strikers of "taking the economy, businesses, daily life hostage."

The tough talk extended to parliament where the government short-circuited a protracted debate on the retirement bill by ordering Senators to vote on a package of its own design.

Labour Minister Eric Woerth, announcing the decision to call upon Article 44-3 of the Constitution, explained there would be a single vote this week, likely Friday, on a package - and no voting on the remaining 250 of some 1,000 amendments.

The final text was expected to be adopted next week by both houses.

The French government - like many heavily indebted governments around Europe - says raising the minimum retirement age from 60 to 62 and overhauling the money-losing pension system are vital to ensuring that future generations receive any pensions at all.

French unions say the working class is unfairly punished by the pension reform and the government should find money for the pension system elsewhere. They fear this reform will herald the end of an entire network of welfare benefits that makes France an enviable place to work and live.

Unions have held several rounds of one-day strikes in recent months, but scattered actions have turned increasingly radical as the bill has made its way through parliament.

"I don't want to die at work," said one Bordeaux student from the Bel Orme High School, among some 3,000 who protested in the southwest city. She identified herself only as 16-year-old Cassandra.

Students barricaded high schools and took to the streets nationwide Thursday afternoon. Hundreds filled the port of Marseille - where dozens of ships waited in the Mediterranean after days of strikes have blocked access to a key oil terminal.

Student protests have forced the government to its knees in the past, and in recent days some have degenerated into violence.

"We've seen a reduction of 30-35 percent of business overall, for the last few days with the rioting in town. Lunchtime, nothing is going on, we've no one. It's more than calm," said restaurant manager Philippe Husser.

In Nanterre, the scene of running street battles between masked and hooded youth and riot police in recent days, the scene Thursday morning was calm, said Mehdi Najar, one of a few dozen red-jacketed mediators organized by city hall to help keep the peace.

In Marseille, hundreds of workers blocked access to the main airport for about three hours early Thursday. Passengers tugged suitcases along blocked roads as they hiked to the terminal, before police moved in to disperse protesters.

Wildcat protests blocked train lines around Paris. Protesters in cars and trucks blocked several highways around the country, from near Calais in the north to the Pyrenees in the south, according to the national road traffic center.

Interior Minister Brice Hortefeux lashed out at "certain people who take parts of our territory for battlefields." Speaking on Europe-1 radio Thursday, Hortefeux said 1,901 people have been detained since early last week.

Hortefeux insisted that the country has several weeks of gasoline reserves and that "the trend is toward improvement" in supplies. Still, he said a quarter of France's gas stations lack fuel.

Kamal Guerfa works - or at least shows up for work - at a gas station in Lyon. But on Thursday, there was nothing to pump.

"We are here, ready to work, there's no problem with that. The problem is that people come to get gas and there is none," he said.

Laurette Meyer's heart sank when she saw the empty pumps.

"It is penalizing. We work in the building construction business. We have employees who drive all day long in order to build the houses for our customers and it's starting to be very difficult," she said.

Families around the country are on edge over the gasoline shortages because school vacations start Friday. Authorities, however, are hoping the vacations cool off student tempers.

On Thursday morning, students shut down the Turgot High School near the Place de la Republique in eastern Paris after a student union vote. Teens sat in the middle of the street, barring traffic. Some sang songs and chanted slogans under eye of the police.

The US Embassy in Paris warned Americans "to avoid demonstrations currently taking place in France." The warning said peaceful demonstrations can escalate into violence, and urged visitors to check with their airlines in case of airport disruptions, and check with rental car agencies about the availability of gasoline.

Workers for Airbus and Hewlett Packard marched through the streets of the southern city of Toulouse, where the city university is closed because of student protests. Ten other universities were also blocked Thursday.

In Strasburg in the east, protesters blocked a sluice on the Rhine.

The strikes are hitting the entertainment industry, too. Lady Gaga's website says the singer postponed two Paris concerts scheduled for Friday and Saturday "as there is no certainty the trucks can make it" to the show.