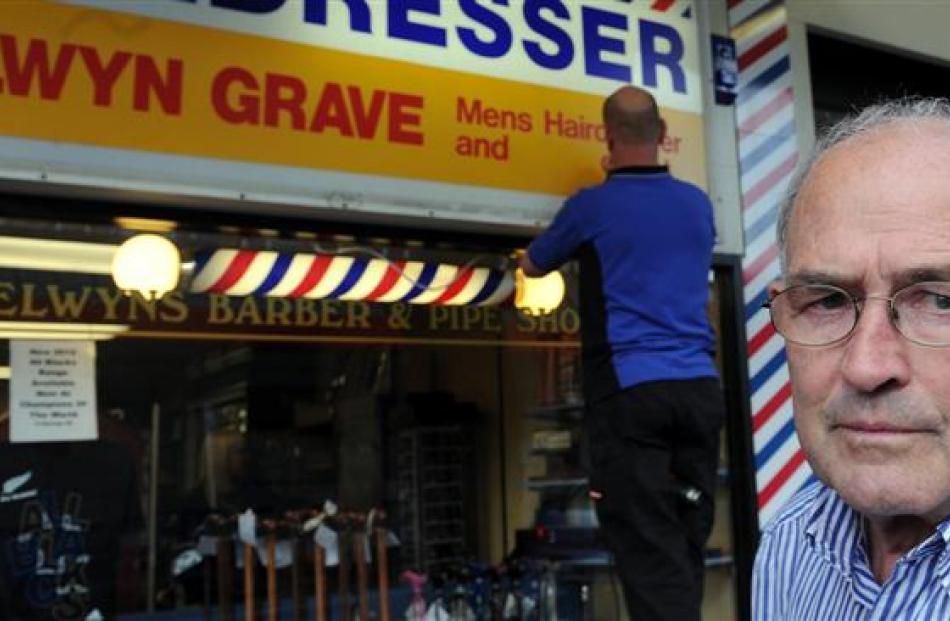 A 50-year-old Dunedin business name was stubbed out yesterday.

"I've been a registered hairdresser and tobacconist for over 50 years, so being forced to change the name of my business does hurt my pride," Mr Grave said.

"I'd probably be the oldest hairdresser and tobacconist in New Zealand. But I've had to pay for it to be changed, which doesn't make me happy. It's not just the signs. I've had to change my stamp, as well."

Any signage which advertises tobacco products must be changed by next Monday.

"It's ridiculous. I was tempted to change it to 'tobogganist', but I thought I might get in trouble."

Mr Grave received plenty of support from customers as his shop-front signage was being amended yesterday.

"Everyone thinks it's silly. Even the non-smokers think it's ridiculous," he said.

"People still like smoking. But you can't fight the law."

Most Dunedin retailers had already removed any tobacco advertising by yesterday, one of the few exceptions being the Sports Dairy in Hillside Rd.

Some retailers instead advertised the availability of tobacco products with "Smoking Kills" stickers in their windows.

"Over the last couple of months, smoke-free officers have been visiting premises to help tobacco retailers meet their responsibilities under the legislation change.

"Smoke-free officers and health promotion advisers will continue to visit all tobacco retailers to ensure they are aware of their new obligations and to check tobacco products are not visible to the public, either inside or outside their premises," Dr Poore said.

"If a member of the public is concerned a retailer is not complying with the changes, they can contact a smoke-free officer at Public Health South."

Retailers failing to meet the requirements of the Act risk prosecution and a fine of up to $10,000.