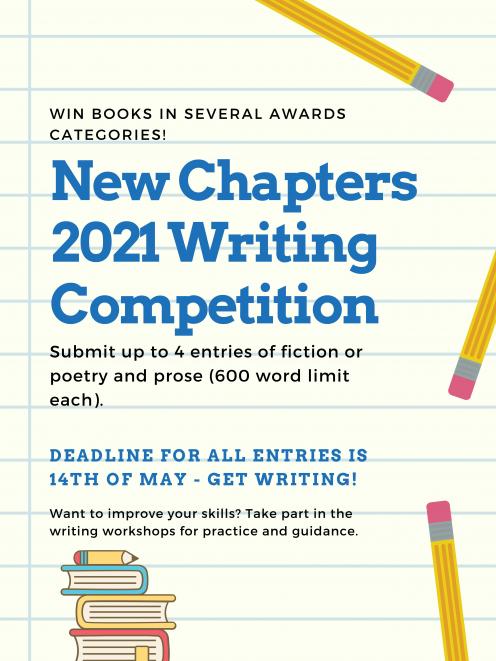 This poster will be plastered around the Otago Corrections Facility advertising the competition. IMAGE: SUPPLIED
The Otago Daily Times prison creative-writing competition is back and promises to be bigger than ever.

"New Chapters" captured the imagination of inmates at the Otago Corrections Facility (OCF) when it last ran in 2018, generating dozens of short stories that wowed judges and the public who voted in droves for their favourite piece.

This year will feature prose and poetry categories, with a limit of 600 words, so writers can really exercise their imaginations.

The inaugural winners focused on the power and beauty of nature — one describing the drama and force of the raging sea, the other a simple plover on the prison grounds — but entrants this year would not be restricted by genre or subject.

ODT editor Barry Stewart was excited to see what the competition yielded.

“‘New Chapters’ was a great success first time round and we were hugely impressed by the quality and range of the writing,” he said.

Mr Stewart hoped giving prisoners the opportunity to become published authors in the newspaper was yet again a strong incentive.

“Some of these men have obviously done some pretty regrettable things but if we can give them a leg up in terms of their rehabilitation, it’s got to be a good thing for the community as a whole.”

OCF currently has a creative-writing group, facilitated by criminology students from the University of Otago, and the ideas were flowing.

Inmates will have six weeks to craft and hone their entries before winners are picked in May.

Leading up to the deadline, a couple of Dunedin’s top writers will run a workshop at the prison to help entrants understand the importance of the editing process and assist them with fine-tuning their work.

The three judges, who boast some sparkling literary pedigree, will be announced next week as will a new sponsor.