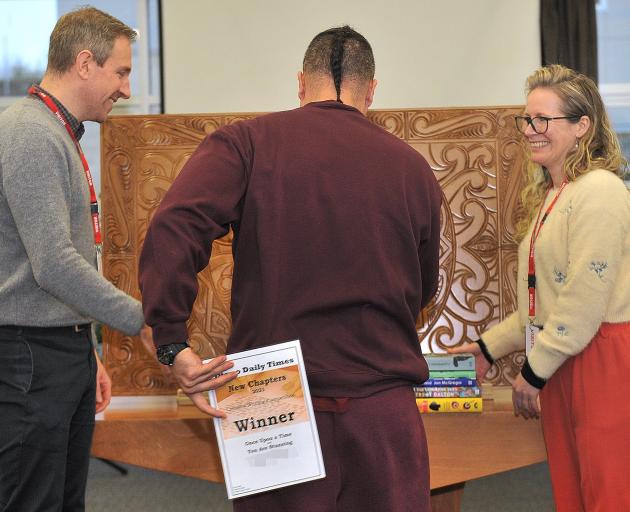 The winner of both ‘‘New Chapters’’ categories receives his prizes from judge Becky Manawatu yesterday. PHOTO: CHRISTINE O’CONNOR
It was double delight for this year’s “New Chapters” winner after the same man claimed both short-story and poetry prizes.

The Otago Corrections Facility prisoner, aged in his 40s, who was serving time for violence-related offences, joked that his dual victory was never in doubt.

“I always knew I was going to win it,” he quipped.

“New Chapters”, a creative writing competition run by the Otago Daily Times in partnership with Corrections, is into its second year, and the bar has undoubtedly been raised.

The winner received news of his triumphs — for his story Once Upon A Time and poem You Are Stunning — during a ceremony at the prison this week, as did the three other inmates whose work was highly commended by judges Becky Manawatu, Emer Lyons and Liam McIlvanney.

Manawatu, the Burns Fellow whose bestselling novel Aue has won several awards, attended the prize-giving and heaped praise on the writers.

“I was just honoured to be trusted with reading your work and it was really hard to choose a winner because they were all awesome,” she told the men.

This year was the first time that “New Chapters” had a poetry category.

McIlvanney , co-director of the University of Otago’s Centre for Irish and Scottish Studies, said he found the entries “moving, harrowing, enlightening and inspiring”.

“The writers had clearly taken real pride in their work and that was evident in the quality of the submissions,” he said.

Lyons, a poet, playwright and fiction writer, who is also part of the Centre for Irish and Scottish Studies, and who ran a workshop at the prison last month, was similarly impressed by the standard of work.

She was particularly taken with the winning poem.

Lyons described it as: “a poem of self-empowerment with shadows of inter-generational trauma. Clear, concise and daunting in vulnerability.”

McIlvanney was impressed with the poet’s deft handling of rhythm and rhyme.

“But what sets the poem apart is the unexpected twist in that final couplet, where we realise that the speaker is addressing himself,” he said. “This is a poem with real heart and intelligence.”

Does he ever get public recognition in his own name? If not is this his choice to remain anonymous because he is a prisoner? If so that's fair, if imposed on him it isn't.
Chances for publication elsewhere after he is released is enhanced by being already a recognised well-regarded writer.
Do we readers get to read his and other high-placed writing?

Most prisoners' names are associated with crimes & conviction, unless they are of the strangely privileged growing number with "promising sports careers" and so on whose names irrespective of crime cannot be published.

I'd like to see the names of the less protected associated with their achievements as much as with their crimes.