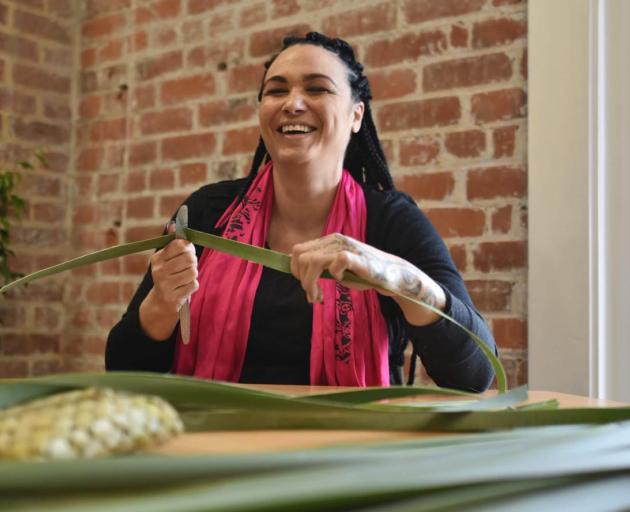 Traditional Maori artist and fashion designer Amber Bridgman has been selected for the 13th Festival of Pacific Arts and Culture. Photo: Kerry Hodge
Dunedin artist Amber Bridgman is weaving her way to Hawaii.

The traditional Maori artist has been chosen to represent Aotearoa in the 13th Festival of Pacific Arts and Culture in Hawaii in early June.

Ms Bridgman, who works as a Maori adviser at the University of Otago, specialises in traditional Maori weaving and design.

About 10,000 visitors and delegates from 28 nations will attend the event, which showcases visual art, films, poetry and more from Pacific Island countries and territories, and facilitates discussions about critical issues in the Pacific.

Ms Bridgman was chosen for the festival after completing a 30,000 word application that took a week to write.

The application process alone was an achievement to be proud of, regardless to whether she was chosen or not, she said.

‘‘I just thought I have no chance of getting in because I thought they are looking for top artists in the country, but obviously I ticked their boxes.’’

She believed she was one of only two South Island Maori attending and was proud to represent southern Maori during the two week festival.

‘‘It’s really important that when you are taking a delegation of Maori people overseas that it’s not just North Island Maori.

‘‘We have different dialects and cultural practices, so I explained in my application it’s important to have the representation from the south.’’

She often used natural resources in her work, which would be a biohazard when travelling and meant certain work would have to be left behind.

However, she was unfazed and would access similar materials and collaborate with other artists when she was in Hawaii — that was what the festival was all about, she said.

She had not yet decided what she would present at the festival, but was working on ideas.