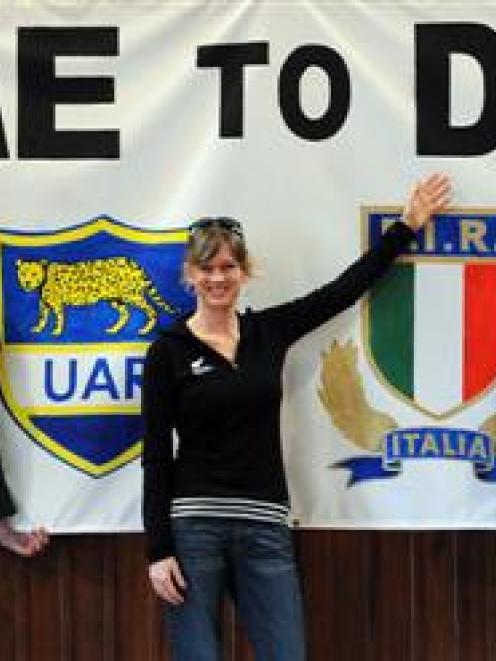 For the past two years, the Columba College art pupil has made a name for herself painting pictures of disposable coffee cups from Dunedin cafes.

"Each cafe has their own paper cups with insignia on them.

"I like to paint them on canvas because they are nice and bright, and it reminds people of how much a good cup of coffee can make or break a day."

So, when Dunedin International Airport air traffic controller Kate Lindsey was looking for someone to paint a 1.5m x 6m Rugby World Cup welcome sign to hang off the airport's control tower, Alice was her go-to girl.

With help from fellow pupils, Alice hand-painted the sign which welcomes the Romanian, English, Argentinian, Italian, Irish and Georgian rugby teams, who will play at Forsyth Barr Stadium during the Rugby World Cup.

Mrs Lindsey said the banner would be hung from the control tower on Thursday along with the flags of each country.

"It is to create a buzz for the Rugby World Cup and make the teams feel welcome as they arrive at the airport."

The first team to arrive in Dunedin will be Argentina on September 1, she said.