Push for change after daughter's death at party

The parents of a 19-year-old who died at a Dunedin flat party are not angry, but want to see change.

Sophia Crestani, a second-year University of Otago student, died when she was caught in a stairwell pile-up at a flat in Dundas St known as The Manor. 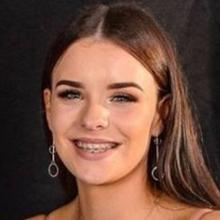 Sophia Crestani. Photo: Supplied
Her mother, Elspeth McMillan, said her daughter was "joyful, creative ... She always lit up any room she walked into."

"How do you rationalise going to a party to hang out with your friends and have some pre-exam fun, and end up being crushed to death."

Her father, Bede Crestani, said alcohol was an issue in Dunedin and across the country, and he hoped to see students become the driving force behind changes in student culture.

"We’ve never been angry. Sophia made her decisions and we supported them.

"But we do want to see change.

"There’s a cultural change we’d like to see where students pick up the responsibility and start to improve their own situations, with the rest of us on the outside helping them."

Miss Crestani’s parents were in Dunedin yesterday for the signing of The Sophia Charter, a multi-agency agreement which aims to improve student safety and wellbeing in north Dunedin.

Many of Miss Crestani’s relatives were present at the signing ceremony, including her twin sister and friends from Wellington.

The charter was signed by leaders from the University of Otago, police, Fire and Emergency New Zealand, the Otago Property Investors Association, the Dunedin City Council and the Otago University Students’ Association.

At the signing of The Sophia Charter last night are (from left) Sophia’s twin sister Frances Crestani and parents Elspeth McMillan and Bede Crestani, of Wellington. PHOTO: LINDA ROBERTSON

All agreed on their pledge to ensure north Dunedin became a stronger student neighbourhood where residents took responsibility for themselves, each other and the wider community.

While her death was "a loss that can never be rationalised, justified or forgotten", the charter was developed because "we didn’t want her death to be in vain", Mr Crestani said.

University of Otago vice-chancellor Harlene Hayne said the university was grateful for the courage of both parents.

"It has been a privilege to walk alongside them and we look forward to honouring Sophia’s memory through positive community action."

Both parents spoke of their loss to a large gathering of students before the charter was signed.

Ms McMillan hoped students would consider situations in which they found themselves.

"Take that time to think or assess the situation and get out if you need to ... looking for the risk, keeping their friends safe, keeping themselves safe."

It was hoped revisiting the charter each year and ensuring new intakes of students were alerted to its significance would ensure ongoing change.

A scholarship fund in Miss Crestani’s name had raised more than $70,000.

Her parents hoped a second scholarship would come to fruition this year.