By Hamish MacLean
0 Comments
The scenes that greeted Dunedin firefighters in Christchurch in the days and weeks after the earthquake struck have stayed with them 10 years on.

Several Dunedin career and volunteer firefighters rolled out of the Dunedin Central Fire Station 12 to 24 hours after the 6.3-magnitude earthquake had felled large parts of Christchurch city to help out there. 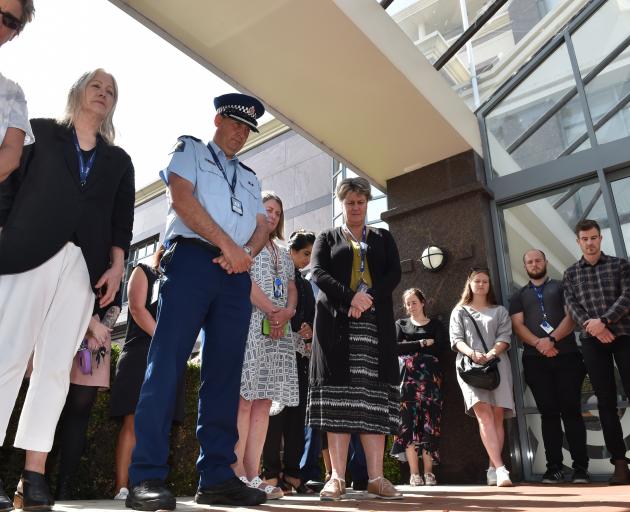 Dunedin police and staff pause at the Dunedin Central Police Station in memory of the Christchurch earthquake. Photo: Gregor Richardson
Later still, Dunedin firefighters were called on to staff appliances for normal daily duties as the Christchurch team remained overtaxed.

The imprint the catastrophic 2011 earthquake left on Fire and Emergency New Zealand staff, and the organisation itself, had been indelible, Fenz East Otago Area Commander Laurence Voight said.

An enormous amount of resources had been put into Christchurch and to recognise both what the people of that city had been through and the commitment of all those who sacrificed for the recovery effort, at 12.51pm yesterday, 21 staff at the Dunedin Central Fire Station stood outside their station in silence, reflecting on the events of 10 years ago.

The earthquake was a watershed moment for the organisation in its understanding of the support people need after responding to catastrophic events, Mr Voight said.

However, Fenz had now raised its game, he said.

The flag flies at half mast at the Dunedin Central Fire Station as 21 Dunedin Fire and Emergency New Zealand firefighters observe a minute of silence at 12.51pm yesterday to mark the Christchurch earthquake on February 22, 2011. Photo: Peter McIntosh
The earthquake had brought people within the organisation closer together, he said.

Fenz East Otago Assistant Area Commander Craig Geddes went to the September 2010 earthquake in the immediate aftermath, and he was one of many Dunedin personnel who helped in the weeks after the 2011 quake as Christchurch staff recovered from their "huge ordeal".

"It affected not only the firefighters, but the community of Christchurch, obviously," Mr Geddes said.

"The recovery phase has been long, and certainly tough for the firefighters, but also their families."

Police in Dunedin paused for a minute of silence at 12.51pm at the Dunedin Central Police Station yesterday as well.