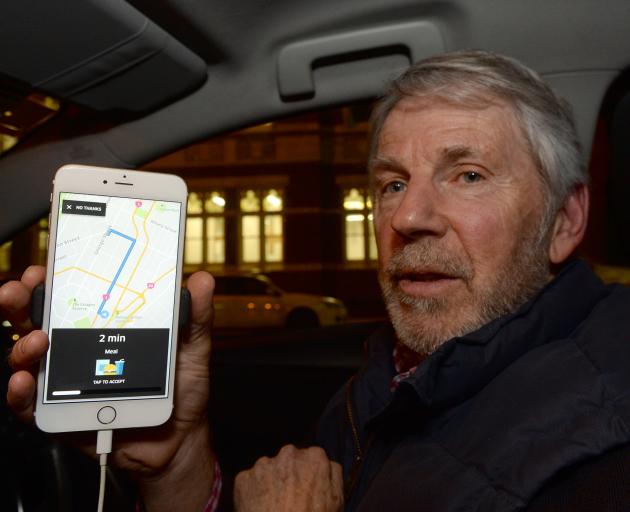 Ready to go ... Uber driver Mike Collett waits for his next fare on his phone after the San Francisco-based company launched in Dunedin yesterday. PHOTO: LINDA ROBERTSON
It is here. After a long wait the billion-dollar ride-sharing service company Uber is now available in Dunedin.

Dunedin is the sixth city in New Zealand where the San Francisco-based ride service company is available.

It will launch in Queenstown next Thursday, and has been available in Auckland since 2014.

One of the first-day drivers, Mike Collett, said it had been a fairly quiet day, but he had picked up about 10 passengers by 6pm.

"I expect it will build up as more people become aware it's now available here. Most of the people I have picked up seemed to have been waiting for it.''

In the down time he also worked for Uber Eats, the company's food delivery service.

As he was retired, Mr Collett said he signed up to the service as a driver to supplement his superannuation.

"I drove a taxi when I was a student decades ago, so it's not a totally new experience for me, and with the app telling you where to go it's a lot easier in that respect.''

Uber does not employ drivers; rather it takes a cut of between 25% and 28% each time a ride is booked through its app.

Uber spokeswoman Nicky Preston said there were about 30 Uber-accredited drivers in Dunedin for the launch.

All drivers needed to hold a P endorsement on their full licence and be over the age of 21.

They also needed to pass a background check, be insured, be able to be tracked by GPS, and hold accreditation.

Using the service yesterday a ride from the Octagon to St Clair would have cost about $16, and a ride to Dunedin Airport about $70.

Passengers could be dropped off at the airport, but pick-ups were not allowed. But the company hoped to form an agreement with the airport soon, Ms Preston said.

Concerns have been raised about the company since it was founded in 2009, and earlier this month a group of about 100 New Zealand Uber drivers went on strike about concerns with the service.

Ms Preston said the company had introduced a number of initiatives in recent months following feedback from the drivers, which included paid wait time, ratings protection and a fuel discount.