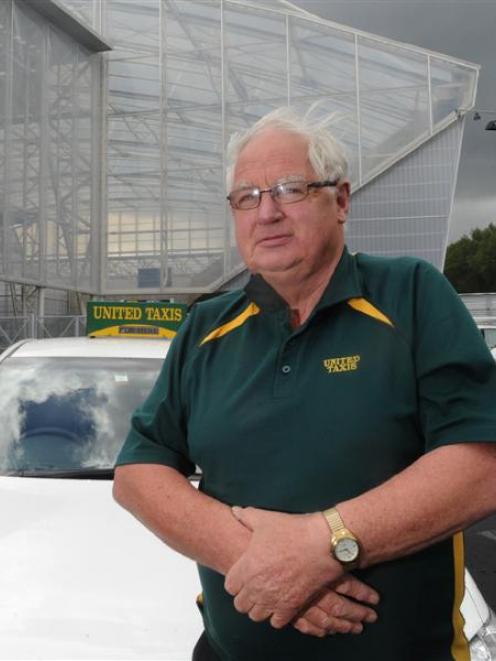 United Taxis director Bill Overton says a deal preventing his company from using a taxi rank at Forsyth Barr Stadium is "crazy". Photo by Craig Baxter.
A Dunedin taxi operator is crying foul after being ordered to stay off the Forsyth Barr Stadium grounds by a rival company.

It was confirmed yesterday Dunedin Venues Management Ltd - which runs the stadium - had signed a sponsorship deal making Dunedin Taxis its preferred taxi provider for the venue.

That meant only Dunedin Taxis would be allowed to use a taxi rank beside the corporate entrance at the stadium's eastern end, with other companies excluded and forced to pick-up and drop-off elsewhere.

United Taxis director Bill Overton contacted the Otago Daily Times yesterday after learning of the deal through an email from Dunedin Taxis.

The email asked Mr Overton to remind his drivers that only Dunedin Taxis had "authorised access" to the stadium grounds.

"We would ask that this is respected or action will need to be taken to enforce it at some future point."

DVML marketing and communications manager Jo Scully yesterday confirmed details of the sponsorship agreement, although she would not say what the deal was worth.

However, the deal meant only some restrictions for other operators, and she was not aware Dunedin Taxis had emailed its rival, warning them to stay out.

"In hindsight, there were better ways to deliver the message, but it's still a partnership that we are proud of and is going to work really well," she said.

The agreement meant Dunedin Taxis would have sole use of the stadium's only taxi rank at all times, and access inside the stadium's cordon on game days, when traffic management plans restricted other vehicle access, she said.

Other taxi companies would be expected to use public drop-off parks beside Gate D, opposite Logan Park, on game days. At all other times, rival taxi companies could continue to use the car park at the stadium's eastern end, but not the taxi rank there.

Mr Overton - a former long-serving Dunedin Taxis driver - launched Mobility Taxis in 1996, before rebranding to United Taxis in 2001, and his company's 26 vehicles regularly carried passengers to and from the stadium.

His drivers were "practically full up" with bookings for the Elton John concert at the stadium on November 25, and he worried the deal meant his drivers would be unable to provide "door-to-door" service.

That was particularly important for the elderly and those with disabilities, he said.

"We used to be able to drop off outside Carisbrook. What's the difference?"

He planned to speak to DVML chief executive David Davies before deciding his next move, but would comply with the email's instructions in the meantime.

"It's not a matter of sour grapes or anything like that. It's a matter of [looking after] the customers.