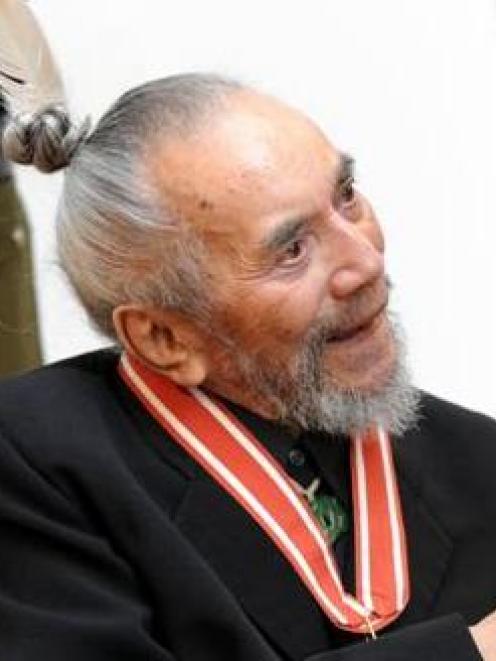 Ralph Hotere
Ralph Hotere, one of New Zealand's most acclaimed and provocative artists, has died.

In a career spanning more than five decades, the 81-year-old became well known for tackling key events in New Zealand's history with his dark and poetic paintings.

He died peacefully in Dunedin about midday today.

Hotere was made a Member of the Order of New Zealand in 2011 - the only person to be awarded the country's highest honour that year.

Born in Northland and of Te Aupouri iwi descent, Hotere's home of Mitimiti played a key role in his work.

He later moved to Port Chalmers in Otago - an area that also became an important influence on his his work.

The impact of his powerful works was recognised with the Order of New Zealand, which was conferred upon him by Governor-General Lieutenant General Sir Jerry Mateparae in the Dunedin Public Art Gallery.

Sir Jerry said at the time that the award "speaks of service, merit, endeavour, perseverance, commitment, excellence and, above all, mana".

Hotere's citation said that as a painter, sculptor and collaborative artist, he had reacted to social and environmental issues through his work.

His art is dominated by black, both in colour and in the artworks' titles, and makes extensive use of words, often quoting poets and his conversations with them.

He dealt with key New Zealand historical events such as the Springbok tour and the Rainbow Warrior sinking.

Hotere also responded to issues closer to his Port Chalmers home, including the Aramoana massacre and a proposed aluminium smelter.

He and other artists and writers were part of the No Smelter campaign against the proposal, which was part of the then-government's Think Big scheme.

He celebrated his 80th birthday in 2011 with exhibitions throughout the country.

That year he also completed an artwork for his Christchurch printer, Marion Maguire, as a sign of support for the quake-hit city.

Hotere's painting are well-regarded by collectors, with his piece Vive Aramoana fetching $183,000 at auction in November last year.

He was awarded an honorary doctorate from the University of Otago in 1994, and was recognised with an Icon Award from the Arts Foundation in 2003.

At the time of his New Year's honour, she said Hotere remained outspoken about issues that troubled the world, even a decade after suffering a debilitating stroke.

"Ralph's career spans over 50 years and reflects his intense spiritual interest in humanity and environment."

New Zealand art commentator and curator Hamish Keith was among those who paid tribute to Hotere on Twitter.

"Ralph Hotere a truly great artist one of our greatest and like Colin McCahon a bridge across two powerful rivers haere ra.

"And it should be said of Ralph Hotere that he was a great warrior artist and he fought with his art for great causes.

"When a great person dies we are left with the changes they made to our world - time to reflect on that."

"A great artist, a friend to poets, a painter of requiems."

Christchurch Art Gallery tweeted: "We're so very sad to hear of the passing of Ralph Hotere. One of the best."

Hotere suffered a debilitating stroke in 2001 and was understood to have been unwell in recent days.

He is survived by his wife Mary McFarlane.

Ms Ablett-Kerr said funeral arrangements would be advised at a later time.