Rangers to rescue of seal in G-string 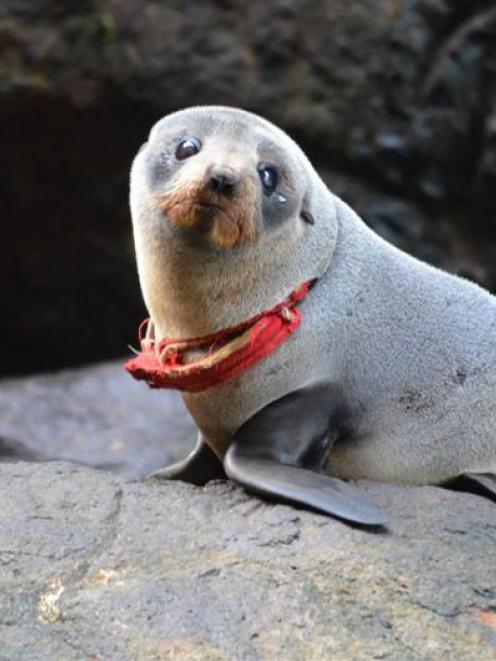 The seal spotted on Otago Peninsula on Friday with a G-string around its neck. It was helped by Doc staff. Photo by David Johnson.
Lovers Leap, a G-string and a young seal all add up to one of Department of Conservation marine ranger Jim Fyfe's better work stories.

The department was told of a seal in strife near the Otago Peninsula coastal arch Lovers Leap about 4.30pm last Friday by Dunedin man David Johnson.

Mr Fyfe "happened to be out at Allans Beach" at the time, so he and another Doc staff member "scrambled off down the bank" to help the seal, which was found to have a G-string wrapped around its neck.

The pair freed the seal of its underwear necklace about 5.30pm.

"We got it early enough. Quite possibly, given that it was fabric, it would have rotted off, but you can never tell.

"We usually don't have a second chance when people see things; if we leave it any length of time, the animal would be gone," he said.

When it came to work stories, this was "one of the better ones".

In an email to the Otago Daily Times, Mr Johnson described Doc's response to the seal's dilemma as "brilliant" and congratulated those involved "for their commitment and dedication to our local fauna".

"Not only was it just on dark when Jim arrived at the beach, but there was a hike of about an hour to get to the site and a vertical drop of 230m, which meant a steep ascent over rocks, clay and damp grass in the dark," he said.

He advised people discarding an item that "if it forms a loop, cut it".