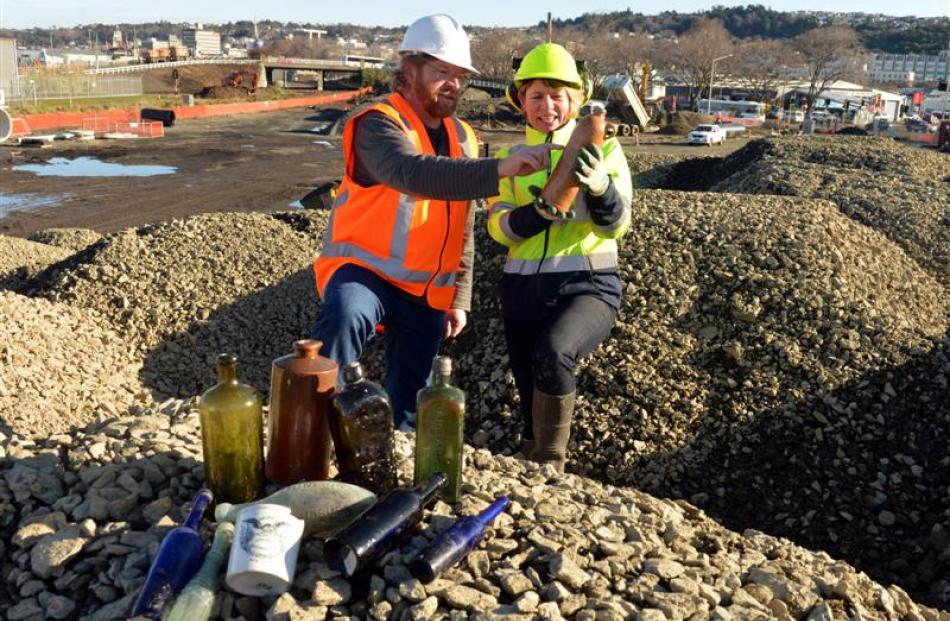 Richard Emerson and Dr Andrea Farminer examine some of the objects recovered from the new Emerson's building site in Anzac Ave, Dunedin. Photo by Stephen Jaquiery.

Emerson's will not just be brewing fine ales from its new site on Anzac Ave, it will also be showcasing pieces of Dunedin's history unearthed during site excavation work.

From bottles for beverages and perfume, to assorted ceramics including pipes, a range of artefacts will be displayed when the brewery opens in 2016.

Jackie Gillies Associates principal archaeologist and heritage consultant Dr Andrea Farminer said the site had been identified, before excavation started, as having hidden artefacts. Hundreds of salvageable items had been found.

Much of the city's rubbish was used to reclaim the land at the beginning of the 1890s, Dr Farminer said.

''We've found amazing amounts of bottles ... ceramics, personal items, combs, brushes ... tooth brushes ... lots of footwear ... so we knew what they were eating, what they were wearing and ... a lot about their social background as well.

''Pretty much every machine [excavator] bucket-load that came out was stuffed chocker full of ... this material.

Most of the items were thought be from the late 19th century but it was hard to put an exact date on some of the finds. In terms of monetary value, nothing was worth much, she said.

Emerson's Brewery founder Richard Emerson said he was not surprised that items had been found but to find things intact had been ''more than amazing''.

''We'll be quite proud to showcase them in our new brewery for the people to see what the history was beneath them, while they're having a beer,'' he said.