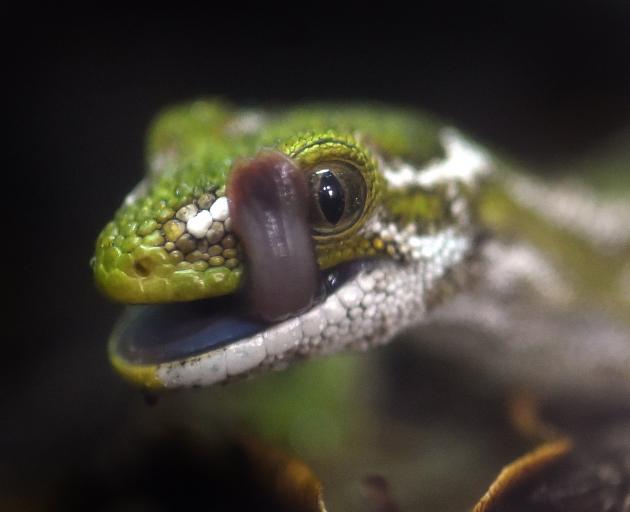 Manawa, Otago Museum’s jewelled gecko. PHOTO: PETER MCINTOSH
Manawa, the jewelled gecko who made headlines after he was smuggled out of New Zealand to Germany and returned to Otago years later, has been put down.

Otago Museum and Te Runanga o Otakou announced the gecko was euthanased after he was unable to be revived during treatments for "a series of ailments".

"Unfortunately, Manawa became increasingly unwell recently. Over the course of this year, he has received treatment from the Dunedin Wildlife Hospital for a variety of ailments. No specific diseases or causes were diagnosed.

"As his age is unknown, his failing health may have been due to natural progression.

"Sadly, the hospital team reported a notable decrease in his quality of life. He lost interest in food and his continued medical treatments were not proving effective.

"The vets at the wildlife hospital advised euthanasia as the humane option."

Otago Museum had joined with the runanga, Department of Conservation and Dunedin Wildlife Hospital to care for the gecko after he was repatriated to New Zealand.

The male gecko was stolen from Otago Peninsula, smuggled into Germany and later sent back to New Zealand after being spotted on Facebook in 2013 by Dunedin herpetologist Carey Knox.

The jewelled gecko (moko kakariki) was one of two taken from the peninsula about 2010, and Mr Knox later recognised one of them, using a photo he had taken of him earlier. The other gecko was also returned but died while in quarantine.

"Manawa is believed to be the first endemic wild animal poached from this country to be successfully repatriated."

Because of concerns regarding the biosecurity risk to New Zealand’s fragile and unique environment, Manawa was required to stay in containment at Otago Museum.

Manawa was named after a competition was held.

The winning entrant, Tara Swan, of Masterton explained that the Maori word "manawa" meant heart, and that geckos were special in her heart, and also at the heart of many conservation stories.