Reroofing to give prison a clean slate

By John Lewis
0 Comments
John Meegan has spent a lot of time behind bars over the past few months - and he has been getting slated for it.

The roofing contractor is one of about a dozen people working on the former Dunedin Prison’s roof, replacing thousands of its 125-year-old slate tiles. 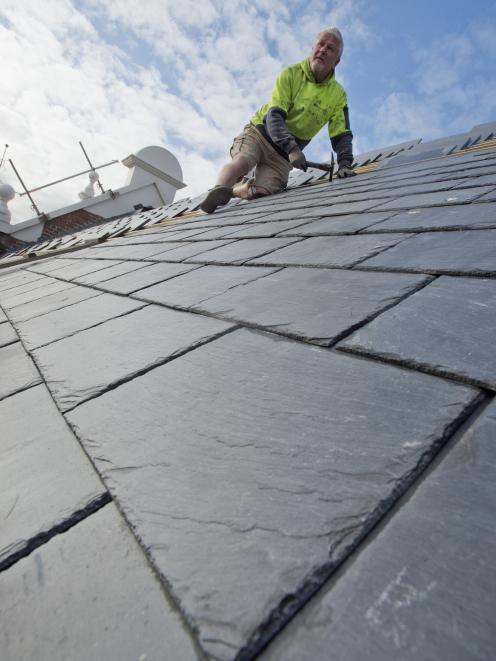 John Meegan Roofing owner John Meegan adds another slate tile to the thousands he is putting on the roof of the old Dunedin Prison. PHOTO: GERARD O’BRIEN
It was a job that was very hard on the hands, he said.

"I’ve had some tremendous cuts off slate in my time. I’m very careful now. I wear gloves all the time."

Mr Meegan said he had replaced about 3000 damaged or decaying slates from the roof of the former prison already, but still had more than 12,000 to do.

"I’ve been taking off all the old slate which is stuffed - you could just about push your finger through it - and I’ve been replacing them so the roof lasts another 120 years."

While some people would start to tire of the sight of the slates by this stage, he said he was starting to see some of the results of his work, which was rewarding.

"I’ll be sick of the sight of them by the time I’ve finished this job too, but it’s coming up quite nice."

He hoped the job would be finished in time for him to "be out" for Christmas holidays with his family.

Dunedin Prison Trust chairman Owen Graham said the reroofing was part of the second stage of its heritage restoration.

"The project is budgeted to the dollar - $660,003 - and includes taking off all the bars which are not original, checking all the windows which are iron sill windows, and then repainting and refurbishing all the exterior as well.

"The whole building will have had a makeover over the last five years, and then we can move inside.

"The courtyard is the next part of the project."

He said the trust’s purpose was to preserve the building so it was not lost.

"By putting this new roof on, it ensures the survival of this building, and it keeps open all those options for its future use."