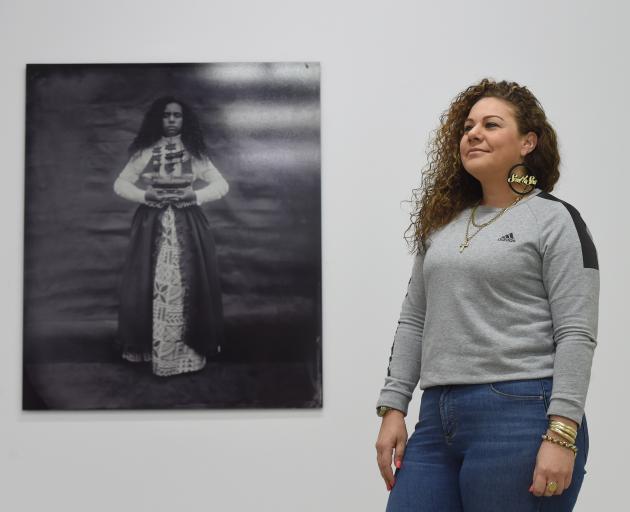 Artist Jasmine Togo-Brisby with one of her works, Ask the Sea, from her Otago Polytechnic exhibition in the Dunedin School of Art gallery. PHOTO: GREGOR RICHARDSON
Because of their heritage and slave titles, the Australian South Sea Islanders' cultural ancestry is almost non-existent.

Otago Polytechnic School of Art artist in residence Jasmine Togo-Brisby is challenging those voids in her ancestry by re-imagining its cultural history through her exhibition, "Birds of Passage''.

The exhibition opened at the art school on Monday and runs until June 21.

The 37-year-old is a fourth-generation descendant of Vanuatuan slaves who were kidnapped or "blackbirded'' from their island homes in 1863.

"Blackbirding'' was a reference to crows that lived in sugar cane and cotton plantations, which were believed to be able to pass on messages to slaves from their families back home.

The exhibition is made up of six photographs and six sculptures that pay tribute to more than 62,000 Pacific people taken forcibly on ships to Australia in the late 19th century and early 20th century.

Togo-Brisby moved to Wellington in 2015, where she studied fine arts with honours at Massey University.

She used her mother, Christina Togo (63), and her daughter, Eden Cassady (13), as models to help her recreate photographs of what she imagined her ancestors would have looked like in 19th-century Australia.

She also sourced crows' wings from the United Kingdom and designed them to look like the ships that were used to kidnap and transport slaves.

Getting the residency had been great, as it allowed her to create a space for her culture to exist, where previously there had been none, she said.

"Our culture has been framed from slavery ... from 40-plus years of white Australian policy.''

The artist said she was passionate about the Pacific slave trade, not because it defined her, but because she felt there needed to be a space for the future of the culture to exist.

"It's not all history, this is about my daughter.

Togo-Brisby said she had always played around with spaces, and the way an environment could make you feel, which drew her to becoming an artist.

"I want my people to see my work and to see themselves in it, and to feel pride in that.''