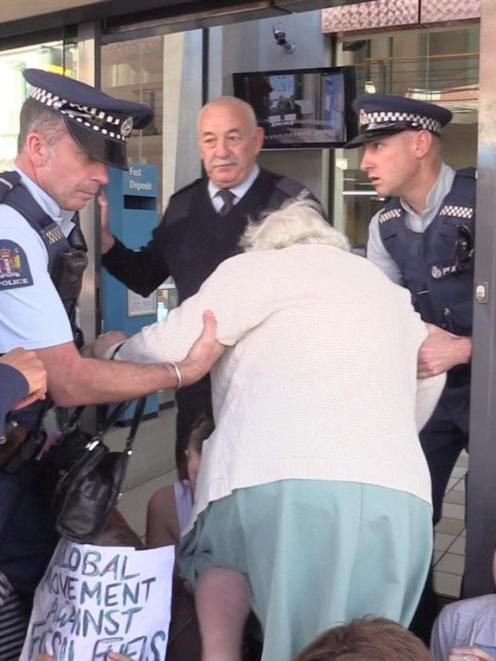 Police help Margaret Saunders into the bank on Thursday. Photo by Craig Baxter.
An 85-year-old woman blocked from entering a Dunedin ANZ has called on protesters to have "more respect for people''.

Police on Thursday had to assist Margaret Saunders, who was on her monthly trip to the bank, over climate change protesters who were blocking three George St ANZ branches.

This comes as one of the protesters has criticised the actions of Dunedin police, who she said encouraged customers to use "reasonable force'' to get into the banks over top of sitting protesters.

A police spokeswoman responded, saying it was "disappointing'' a protester was seeking to blame police for the "disruption to the public caused by the actions of the protest group''.

Mrs Saunders, who is originally from England, told the Otago Daily Times yesterday she was grateful to the three police officers who helped her get into the bank, and called on the protesters to give their actions more thought.

"I think they should have respect for people.

"I do believe in free speech, but they took it a bit too far by barring the entrance of the bank.

"I just think they have that tunnel view on what they are protesting and don't think of anyone else.''

If police had not assisted her over the protesters, she would have had to make another trip into town from her home in Kew, which would have been a considerable inconvenience given her age.

She was full of praise for police, who asked protesters to move aside only for them to refuse, saying they were "polite, courteous and very helpful''.

She called police yesterday morning to say thanks.

"I think they were quite chuffed because they generally have a lot of complaints and things like that.''

She was amused by all the attention she was getting, which included a call from her son who lives in Australia.

"My family think it's hilarious.''

Protest group 350 Aotearoa apologised on Facebook for Mrs Saunders' treatment, saying after the incident they agreed to let older people through to the bank.

However, one of the protesters, Rosemary Penwarden, was critical of the response from police and ANZ to the 120 people who blockaded the banks.

Instead of closing the banks as was done in other New Zealand cities, ANZ staff and police encouraged customers to walk through and on top of protesters sitting in the way.

All the protesters were committed to the use of peaceful civil disobedience aimed at ANZ as the largest funder of fossil fuel projects in the Pacific region, she claimed.

A police spokeswoman said it was disappointed with Ms Penwarden's criticism.

"The role of police is to ensure safety and uphold the law, while recognising the lawful right to protest.

"This is a balance between the rights of individuals to freely go about their daily business without being interfered with by protest action,'' the spokeswoman said.

An ANZ spokesman said a decision was made not to close the banks as there were no other branches within easy walking distance.