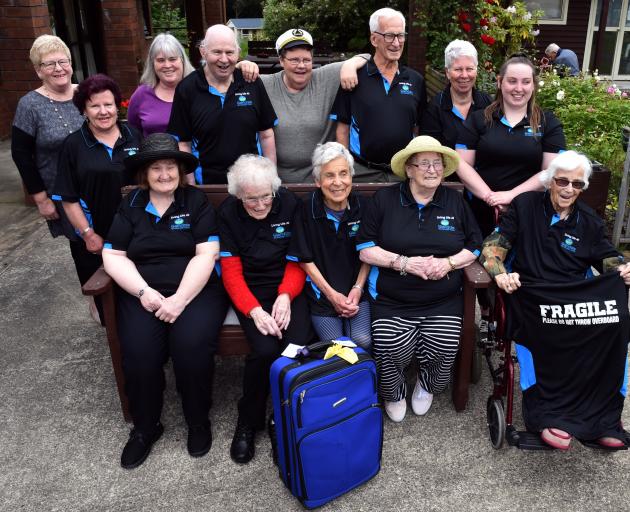 Glendale Retirement Home staff and residents, including some who have never left the country, are bound for Melbourne next week. They are (back, from left) Lyn Whyte, Rhonda Griffin, Susan Jarka, Patrick Byrnes, Heather Morris, Neil Ronald, Gayleen Dunn and Nikita MacPherson; (front, from left) Susan Blok, June Stephens, Marion Barnett, Lillian Adie and Kathleen Munro. PHOTO: GREGOR RICHARDSON
"Fragile: do not throw overboard" — that’s the text on T-shirts designed for a group of retirement home residents heading out on what for most will be their first-ever cruise.

But age has not dimmed the spirit of adventure in a group from Dunedin’s Glendale Retirement Home.

Diversional therapist Gayleen Dunn said next week nine residents and eight staff members and volunteers — ranging from a 24-year-old to people in their late 90s — would be heading out on a trip with Princess Cruises, taking in Melbourne, the Marlborough Sounds, and returning to Otago Harbour before heading out again to Akaroa, Wellington, Tauranga and returning to Auckland.

"We’re a little rest-home but we have big ideas, and big dreams," she said.

It was "only four sleeps" until they would be flying up to Auckland, and from there getting on board their ship.

The cruise had been nine months in the preparation, and Ms Dunn said she had kept an eye out for the best deals.

Among the travellers was Kathleen Munro, the 96-year-old former deputy mayor of Port Chalmers, who was born in the town and said coming into harbour at that point would be her favourite part of the trip.

"It would be fantastic if there was somebody on the wharf."

She is also known as the owner of "Katie’s Oven" which she ran for a number of years, preparing scones and pikelets early in the morning for the wharfies.

Now a wheelchair user, Mrs Munro had a pragmatic attitude to the trip, but was still looking forward to it.

"I am going to enjoy what I can, when I can. I’m starting to believe it’s actually coming true," she said.

Cruises were not something retirement homes did normally, but Glendale residents were an adventurous bunch and had also been on the TranzAlpine train, Ms Dunn said.

There were 33 residents in the rest-home, but not everyone had wanted to go or had been able to. The relatively small number of people going meant staff would be able to keep an eye on residents on almost a one-on-one basis.