By Eileen Goodwin
0 Comments
Suicide prevention advocates had the sad task of adding 27 pairs of shoes to their collection yesterday to mark an increase in deaths.

The 606 pairs were placed in the upper Octagon, one for each death in 2016-17. Figures released on Monday revealed there were 27 more deaths in that year than the previous year.

Organised by the Yes We Care campaign, the shoe collection started in Bluff, and would arrive at Parliament on September 10, World Suicide Prevention Day. Life Matters Suicide Prevention Trust was involved in the Dunedin event, and people shared their experiences.

One woman said she had been told by the emergency psychiatric service that if she was well enough to get herself there, she did not need help. Diane Hall, of Nelson, who is travelling with the shoes, lost her husband Jake to suicide in 2014. His depression had been diagnosed, but he lacked follow-up support. She said families were left largely to fend for themselves after a bereavement. 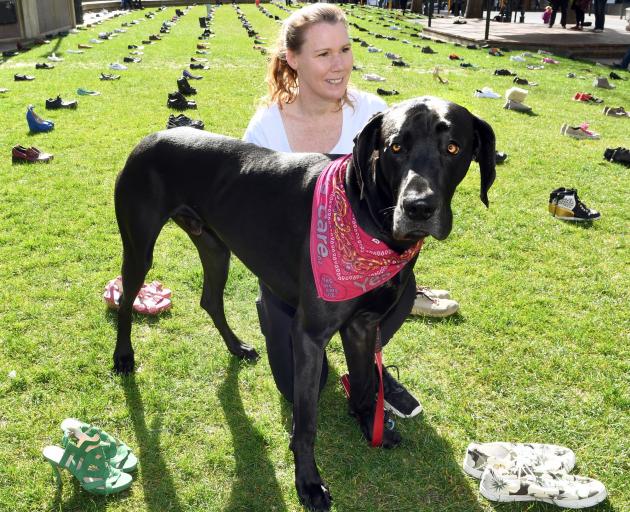 Spook, a great Dane, with owner Colleen Symon, of Dunedin, at the event in Dunedin held to mark suicides. Photo: Stephen Jaquiery.
She was heartened by the community response to the campaign. Dunedin woman Anna Tipa lost her daughter nearly 10 years ago. There had been no improvement in the suicide rate since then, she said.

Life Matters chairwoman Corinda Taylor said she continued to fight alongside other campaigners for a review of the mental health system. She and Denise Kent made presentations to the health select committee in May, but had not yet received a formal response.

Campaign co-ordinator Simon Oosterman said families were calling for a national suicide reduction target and an urgent independent review. The Government refused to hold the review, despite 77% of New Zealanders supporting one.

"Funding hasn’t kept up with our ageing and growing population with increased mental health needs.

"Demand for mental health services has increased by 60% since 2008, with funding to 2017 only increased by half that," Mr Oosterman said.

Mr Oosterman said mental health was an election issue for the first time in more than two decades.

A separate collection of shoes is making its way to Wellington in the North Island.