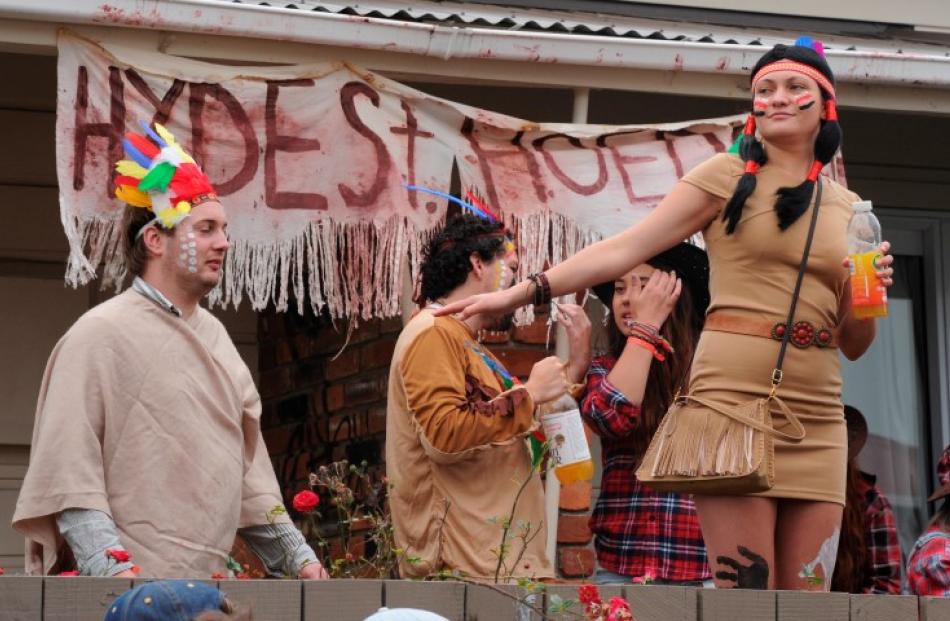 Inclement weather and the absence of the royals didn't deter revellers from taking part in the Hyde St keg party in Dunedin today. Photo Craig Baxter

The Duke and Duchess of Cambridge couldn't make it in the end.

But, just about everyone else was there.

The Otago University Students Association had formally invited the royal couple to pop in ''for a drink and a dance''.

The cold weather may have kept William and Kate away, but it was a colourful mardi gras atmosphere, as just about every character imaginable danced in the street and drank from wine bladders and cider bottles.

''We're all here to have fun and support each other,'' Hyde St resident Deidre Richardson (21) said.

''It's not about binge drinking. It's about everyone coming together as one and having a good time.''

The annual street party officially started at 9am. By lunchtime, half a dozen dazed party-goers had already been escorted, or carried, out.

A 50-strong posse of police made six arrests before the official 5.30pm end of the party.

''There hasn't been anything major; mainly minor disorder charges. We'll probably have a few more [students] in the cells later on tonight,'' Sergeant Dion Phair said.

A St John and student health team treated 44 people, including seven people who were admitted to Dunedin Hospital.

The party peaked around 2pm, with the introduction of a ''one-way door'' policy.

''We want to make sure everyone is safe and that the Hyde St party goes on for decades to come.''