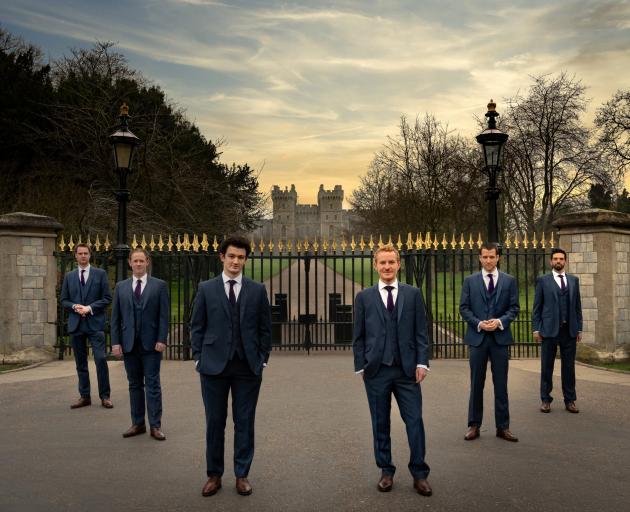 The Queen’s Six a capella group, from left, Dan Brittain, Nick Madden, Tom Lilburn, Dom Bland, Simon Whitely, and Andrew Thompson. Photo: Supplied.
Singing at royal weddings and funerals, with your performance being televised to millions around the world, is literally all in a day’s work for former Dunedin man Nick Madden.

Nick Madden, a University of Otago graduate and lay clerk in the Choir of St George’s Chapel, Windsor, was last month one of three choir members who sang at the funeral of the Duke of Edinburgh. Mr Madden gives an insight into his working day at the chapel, shares how he copes with the pressure of royal occasions, and what it is like to live inside a castle.

You must have sung at many big royal occasions. How does it feel to be part of that?

It is always an honour and a privilege to sing as part of the Choir of St George’s Chapel at royal occasions, sometimes to lots of VIPs and in front of cameras. But alongside regular services, it’s very much part of the job of being a lay clerk here to sing under circumstances which are often a bit extraordinary, and in some ways, you do get used to that.

Do you get nervous in those situations?

Of course, sometimes it’s extremely nerve-racking, especially those ceremonies when you know you are being broadcast around the world. The effect of all the military regalia, marching bands, flags and processions is meant to be impressive, and it can definitely add to the nerves. But over the years working as a professional singer, I’ve come to think of nerves as good thing. They can be useful as they keep you grounded and focused. It’s just a question of working out how to breathe through them so they don’t take over or get in the way.

How do you cope with the pressure of singing to royalty, or to an enormous, televised audience?

In the immediate run-up to a big event, I’ll be doing lots of breathing exercises to keep myself calm. And then while I’m singing, I’ll find one camera crew member, or someone in the congregation or audience to focus on, rather than thinking about how many people are in the room or watching at home. Having enough rehearsals and being well prepared is really important too: it’s good to remind yourself that you’ve put that work in when you’re feeling the pressure in the moment.

How did you come to be a lay clerk of the St George’s Chapel Choir?

One way or another, I’ve been singing all my life. My dad (Richard Madden) was assistant director of music and sang in the choir at St Paul’s Cathedral in Dunedin. I started there as a chorister when I was 6 years old when there were people like Martin Snell and Jonathan Lemalu singing in the back rows. There was a really high standard of music-making, and that inspired me to keep singing through my time at school and university. I moved to the UK in 2005 to take up a position as a professional singer as a lay clerk at Ely Cathedral, just north of Cambridge. The job at St George’s came up two years later, and after auditioning and interviewing, I was offered the position here. 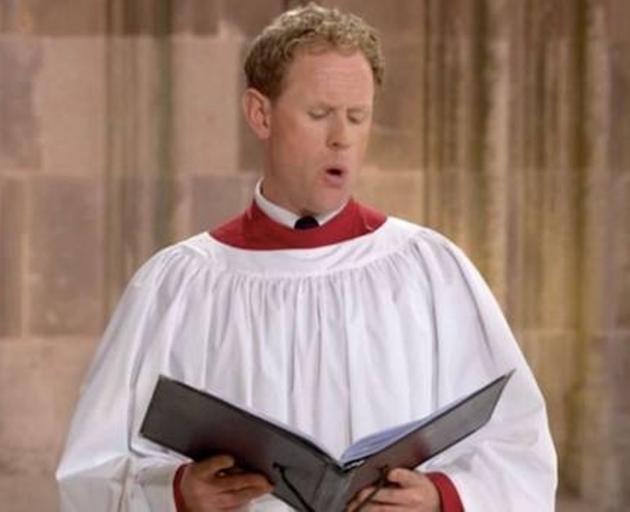 Last month, alumnus Nicholas Madden was one of three Lay Clerks of the Choir who sang at the funeral of the Duke of Edinburgh. Photo: Twitter.
What is the most memorable royal occasion you have performed at?

The wedding of the Duke and Duchess of Sussex was pretty amazing, but the occasion that stands out for me was the memorial service for Sir Edmund Hillary in 2008. The congregation looked like a Who’s Who of famous New Zealanders, and of course the Queen was there too, and to top it all off the service began with me singing a solo written by my dad. Now that was a nerve-racking experience!

You are also a member of the Queen’s Six. What is this exactly?

The Queen’s Six is an a cappella vocal group made up of six of the lay clerks from St George’s. The group was founded in 2008 on the occasion of the 450th anniversary of the accession of Queen Elizabeth I, from whom the group takes its name. Our repertoire ranges from renaissance polyphony and madrigals through to folk songs, pop and jazz, and we perform ... all over the world.

Do you perform at other places as well, apart from St George’s Chapel?

Yes! Outside regular chapel services at St George’s, I perform a lot with the Queen’s Six, of course, but also sing with other groups like the Sixteen, Tenebrae and the Tallis Scholars. I also do some more niche work, recording film soundtracks at Abbey Road and Air Studios with London Voices, or singing medieval repertoire with the Binchois Consort. I’m very lucky that my work with these groups takes me all over the world to sing in some incredibly beautiful buildings.

You studied biochemistry and genetics at Otago. How did you come to choose singing as your career?

I loved my studies in biochemistry and genetics and I worked for two and a-half years in a pharmaceutical testing lab after I graduated, but in the end I realised that I was going to need to go further with my studies in that area to make any real progress. That would have meant giving up the musical opportunities that were opening up to me, and I realised I had to make a choice and music was it.

What does a working week at St George’s look like for you?

In normal non-Covid times, we sing eight services a week during term time with three services on a Sunday. Outside of that, the time is my own to sing elsewhere, and I also teach singing at a boys’ school one day a week.

What is it like to live at Windsor Castle?

It’s definitely a unique environment and although it can feel like a bit of a fishbowl, especially when there are thousands of tourists visiting every day, it really is an extraordinary place to live. The houses where the lay clerks live in the Horseshoe Cloister were built in the 1470s for the singers of the day and have been continuously lived in since that time. Being part of that tradition is probably something that only happens once in a lifetime. We’re also incredibly lucky to have access to a lot of green space right on the doorstep, which has been a lifeline during lockdown periods over the last year.

Any special highlights or memories from your time at Otago?

There are probably too many to mention! It was such a great time, living away from home for the first time on and around campus, but still with my parents and family nearby in Dunedin. I loved my time studying, especially the lab work, but probably the most formative experience as a student was singing in the University Capping Sextet. My dad, Richard, and uncle, Gerald, both sang in the group when they were students, and I’ll never forget singing at the centenary concert at Marama Hall in 2003 with them, and many generations of members in the audience. Five years dressing up as a clown and singing bawdy arrangements of a cappella music probably has a lot to answer for in terms of where my career has ended up today!

It’s been a long and difficult year due to the pandemic. What are you looking forward to most this summer?

I can’t wait to get back to performing live concerts to live audiences this [northern] summer. It’s been amazing to see how inventive people have been keeping things going online, but it’s no substitute for the real thing. It’s not going to be easy navigating touring in a post-Covid, post-Brexit landscape, but I’m optimistic the appetite for live music hasn’t gone, and the determination is there to get things back on track.

This article was first published by the University of Otago.