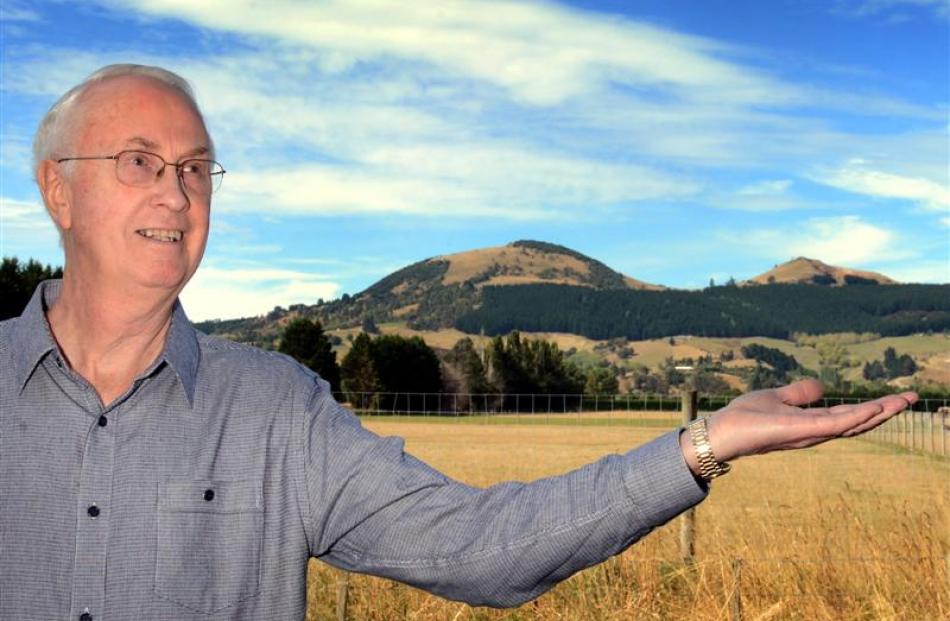 Bill Rolfe (72) believes he has an answer to a dispute over a consent for quarrying on Saddle Hill. Photo by Peter McIntosh.

A Dunedin man believes he has the answer to a mystery at the centre of a decades-old dispute over quarrying on Saddle Hill.

The conditions of a resource consent allowing quarrying on the lower hill remain a bone of contention, because the consent - which the High Court ruled last year most likely existed - has been lost.

However, Bill Rolfe (72) believes a memory of the conversation he had with his lawyer father, Fred Rolfe, more than half a century ago sheds light on what was in the consent.

Whenever he drove past Saddle Hill, his mind went back to a fishing trip about 1960 where his father, as they passed the hill, spoke of his delight a consent for quarrying included protection for the hill's skyline.

Bill Rolfe is sure of his memory and believes his father, a former president of the Otago District Law Society who took an interest in the outdoors, heard about the consent from fellow lawyers.

''What it means is that there definitely was some form of consent given that was subject to certain conditions,'' he said.

His father was a ''straight-laced'' man who would not have made the comment unless he was completely sure of the facts.

He was unsure of the exact date of the conversation, but it had to be between 1957 - when his father first bought a car - and 1961, when he died.

He realised his memory was not hard evidence, but hoped it could be of use.

''If it helps bring somebody else into the picture that has some recall of it then that would be useful.''

Council resource consent manager Alan Worthington welcomed the information and said he would be ''keen to hear from the chap''.

''It may not lead to anything at all, but it may assist in building a clearer picture,'' he said.

Any useful information on the conditions of the consent was welcome.

This included evidence from people involved in projects which used fill from the quarry - including the building of Dunedin International Airport - and correspondence and historical reports in the Otago Daily Times stating the owners had consent and the skyline would alter incrementally as quarrying continued.

He also referred to minutes of a Saddle Hill Community Board meeting in 1996, which said the quarry operation was ''in compliance with the resource consent''.