Safety fears for kids after car goes through fence 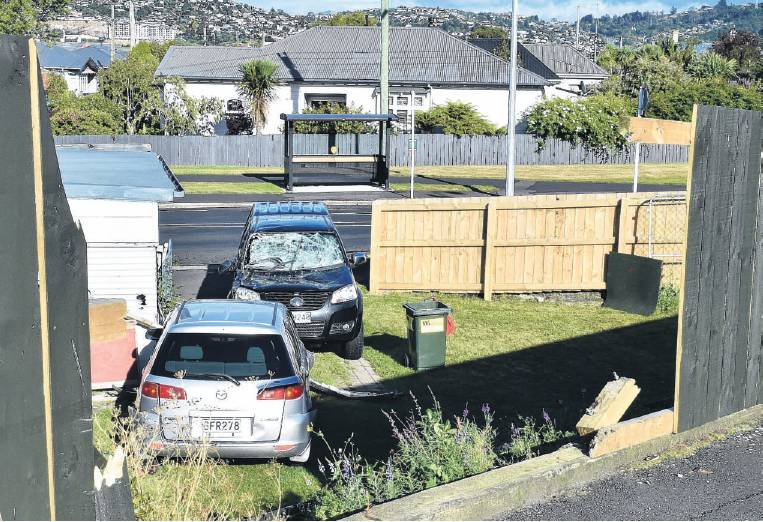 It was not the first time a car had accidentally ended up in her yard.

Miss Lindon was sitting in her living room in her home in Royal Cres, Musselburgh, at 5.15pm on Monday, when a car crashed through her fence and landed on top of her vehicle. It narrowly avoided hitting her house.

A similar incident happened in December 2019, when a car also crashed through her fence. Other properties nearby had also received unexpected visitors smashing through their property.

She wanted the Dunedin City Council to see if road improvements could be made, before someone was killed.

"I live right across the road from a daycare centre, and I have five schools that walk past my house.

"It’s a big worry. If they’d done it an hour earlier they would have killed at least one kid."

Her ute was damaged in the latest incident, but luckily both she and the driver had insurance. Her neighbour, Bev Carter, had a car plough into her property in 2008.

"It was pretty horrendous."

She wanted a strong crash barrier put in place outside Miss Lindon’s house, she said.

"If they [cars] go in at another angle they’re going to end up in her kitchen.

"We’ve been lucky every time an accident happens that it hasn’t taken out a life."

The Dunedin City Council did not respond to a request for comment yesterday.

Perhaps my understanding of the law is faulty but I thought that if an organisation has responsibility for safety and they fail to take action to eliminate or mitigate a totally foreseeable safety hazard, then that organisation has failed to meet its obligations and can be prosecuted/sued etc. This corner has been a crash blackspot for years yet no attempt has been made to make it as safe as possible. I know there will be a chorus of "People just need to drive properly" comments but we know that many people DON'T drive properly and the residents of the properties here deserve the DCC stepping up and doing something effective to protect them. Unfortunately, substantial and effective barriers at this spot are probably not part of some bureaucratic "long term strategy" so we will simply have to endure more planter boxes and painted dots on the road while REAL safety work is dismissed. And the DCC wonders why so many Dunedin people regard the organisation with utter contempt.