The flat at 49 Brown St, which featured in Scarfies, as it looks now. PHOTO: GERARD O’BRIEN
Two decades have passed since the release of the film Scarfies gave the rest of the world a glimpse of Dunedin student culture, writes Elena McPhee.

Twenty years have flown by since cult black comedy Scarfies depicted the darker side of student life in Dunedin, but the iconic flat on Brown St - and the influence of the film itself - is still part of the city's consciousness.

Feature film Scarfies, directed by Robert Sarkies and including rain, rugby, drug dealing and torture, was released on July 22, 1999.

Although it did well, looking back, Sarkies said he was "ultra-nervous" about the film's opening night. 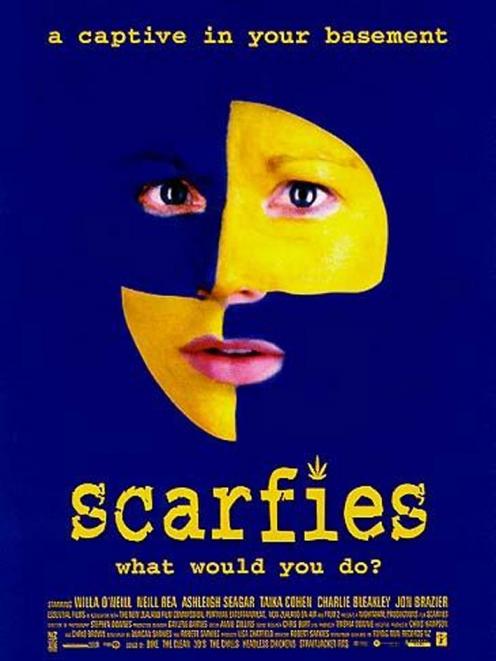 Scarfies became famous for its depiction of student culture in Dunedin. PHOTO: OTAGO DAILY TIMES
A write-up in the Otago Daily Times beforehand put the spotlight on Dunedin's first feature film, but did not reveal its storyline.

"There were plenty of reasons not to come to Dunedin and study [in the film], but it didn't matter."

Scarfies was not only Dunedin's, but Sarkies', first feature film. He and his brother, screenwriter Duncan Sarkies, wrote the script.

"I definitely feel it's surprising 20 years later that film is still somewhat relevant, and somewhat remembered."

Scarfies, which was also the movie that brought Taika Waititi to prominence, showcased the gloomier side of Dunedin, much of the shooting taking place in the rain. 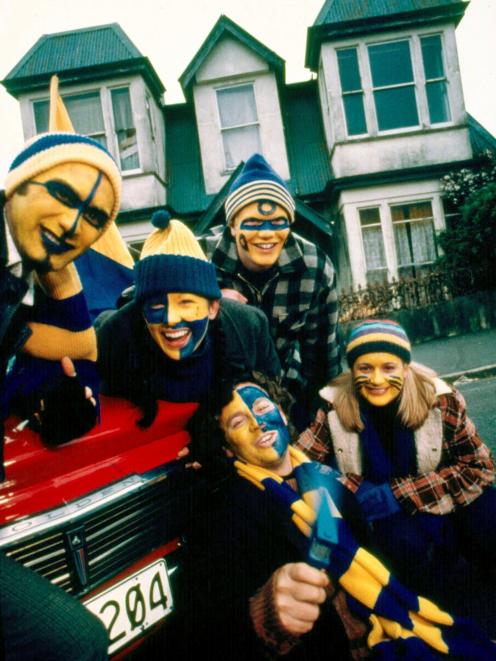 For 10 years, he and collaborators had been making short films in the city, and it was satisfying to finally embark on a full-length feature film - and as a former scarfie himself, he was well-versed in University of Otago student culture.

The plot line of the $1.6million film involves five first-year students who are strangers to one another flatting together in a squat - a Gothic-looking residence at 49 Brown St.

On discovering a cannabis-growing operation in the basement, the students decide to sell the drugs - and the lighthearted tone of the film darkens quickly when the owner of the drugs turns up.

The main premise was: "Could we take these ordinary, likeable, relatively naive kids really, and within the space of 90 minutes get them at the point where they would be credibly contemplating murder?" Sarkies said.

The film was an ensemble piece, and he was fond of all of the characters, played by Neill Rea, Willa O'Neill, Charlie Bleakley, Ashleigh Seagar and Waititi, credited as Taika Cohen.

His character, Alex, was both charming and dangerous - and was good at putting everyone on edge, Sarkies said. 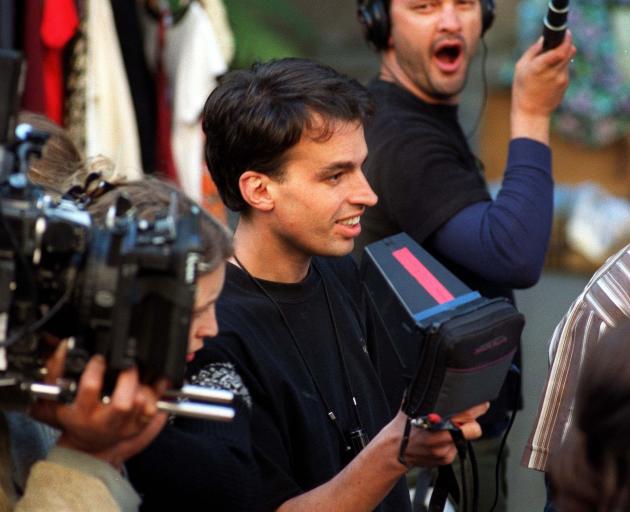 Robert Sarkies on the set of the film in November 1998. PHOTO: OTAGO DAILY TIMES
He pushed the group to take extreme measures to control the drug dealer, whom the students imprisoned in the basement.

Though the film marked the start of Waititi's movie career, for actress Willa O'Neill - who had been performing since she was 8, appearing on stage and screen - it was just about the end.

She said she retired from acting to become a mum shortly after finishing the movie.

The film was a good note to go out on.

"I've had a really varied and I think quite fabulous career as an actor, and I think Scarfies is one of the highlights."

O'Neill, who played pragmatic law student Emma, said she loved the view of the harbour from Brown St so much she moved into the set for the duration of the filming, and looked after the house, along with the set caretaker.

Filming lasted six weeks, and O'Neill said she found it hard to pick a favourite scene, as the entire movie was a "dream job".

The film had a soundtrack of Dunedin Sound songs, and watching The Clean perform twice during filming was a highlight, she said.

Neill Rea’s character Scott speaks to Emma, played by Willa O’Neill. PHOTO: NZONSCREEN
Working with the Sarkies brothers, and the natural-sounding dialogue written by Duncan, fuelled O'Neill's determination to be part of the movie.

Fellow actor Neill Rea, who now plays the leading role of Detective Senior Sergeant Mike Shepherd in The Brokenwood Mysteries, said the movie had been a "fantastic" opportunity for him and his first big movie role.

The popularity of the film when it came out was a nice surprise, he said.

The movie went to the Sundance Film Festival, and the Edinburgh and Melbourne International Film Festivals, and won a slew of awards at the 2000 New Zealand Film Awards.

Iconic university buildings appeared in the movie - and former Dean of the Faculty of Law Professor Mark Henaghan also made an appearance.

Nearly two decades on from Goodbye Pork Pie, and at a time when New Zealand cinema was "very sophisticated and celebrated" - Jane Campion and Vincent Ward's moody arthouse creations setting the tone - Scarfies stood out for its portrayal of youth culture, Sarkies said. 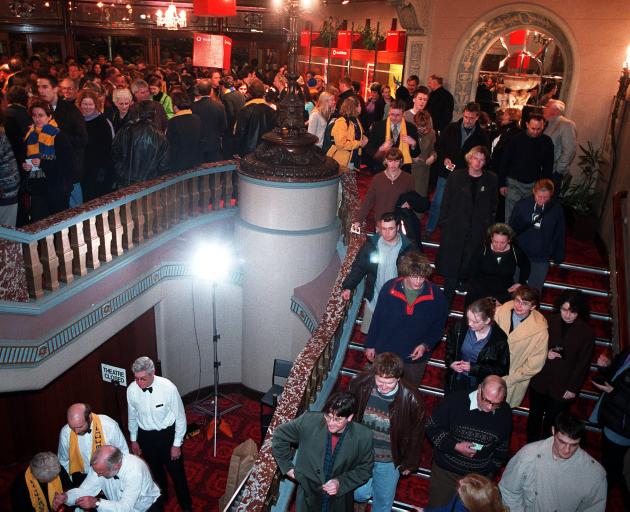 Crowds fill the Regent Theatre for the opening night of the movie. PHOTO: OTAGO DAILY TIMES
The film was the launching pad for "dozens of people" in the cast and crew.

Sarkies returned to the city to make Out of the Blue, the 2006 film about the Aramoana massacre - and more recently returned to the south of the South Island to make Two Little Boys, in 2012.

University of Otago media, film and communication senior lecturer Dr Davinia Thornley said she thought the film played a vital role in "how the rest of the country understands Dunedin".

The film was part of an international wave of movies in the mid-to-late 1990s that were darker in tone and focused on groups of people being thrown together.

Interestingly it was very similar to Shallow Grave, a British black comedy which has a very similar situation as its premise, looking at three or four flatmates - and the movies were almost simultaneous, Dr Thornley said.

"There's a lot of violence and mayhem."

She thought the culture at the university had changed since the film came out: students were more likely to be engaged and have opinions on social issues.

University of Otago marketing director Todd Gordon said the movie was "fondly remembered" by the university - though "most students' experiences probably won't be quite as hair-raising as those in the film".