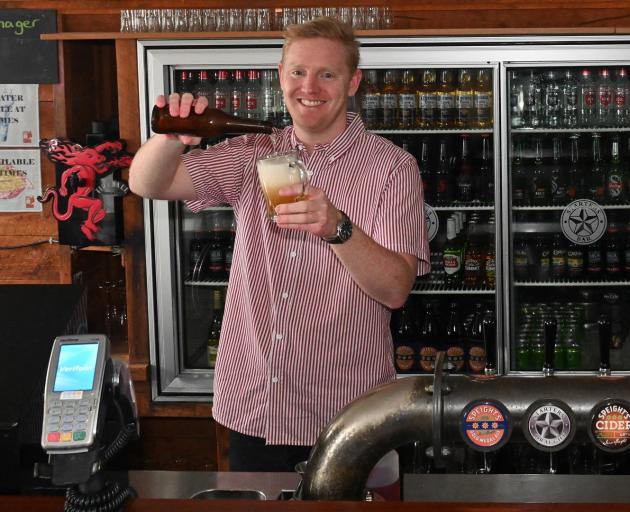 Behind the bar at Starters Bar, recently bought by the Otago University Students' Association (OUSA), is its events manager, Jason Schroeder. Photos: Linda Robertson
One of the last remaining scarfie watering holes is now in the hands of students.

The Otago University Students' Association (OUSA) confirmed yesterday it had bought Starters Bar, and planned to keep it open as a safe place for students to drink.

But an alcohol researcher is sceptical about whether it will be able to draw the crowds, given the changing drinking habits of students and the much cheaper alcohol on offer at supermarkets.

OUSA events manager Jason Schroeder said the previous owners of the Frederick St pub had been trying to sell for about two years, and the association had been looking at buying it for the past couple of months, before taking possession on Monday.

The risk of losing one of the last ''student-focused, and student-friendly'' bars near campus was significant, he said.

''It really is targeted at the first-year market.

''There's not a lot of options for them when they leave their halls at night.''

Mr Schroeder said the OUSA wanted the bar to offer a ''vibrant student experience,'' but also to ensure their safety.

The idea was to create a place for first-year students to go when they left their halls of residence at night, he explained.

''It's a hell of a lot safer than them being forced out on to the street, or into flats with students they don't know.''

Starters Bar.
He said the OUSA wanted Starters to remain a lively student haunt, and it would not be going upmarket or turning into a gastro-pub.

However, he did not envisage a return to the high jinks associated with shuttered student haunts the Bowler, the Outback, Monkey Bar, the ''Gardies'', or previous incarnations of the Captain Cook Tavern.

''We don't want it to go down into how loose the old student bars were.''

Mr Schroeder would not be drawn on how much the OUSA paid for the bar, nor how much they planned to charge for a jug or a pint, but said the aim was to open early in the 2019 student year.

Meanwhile, a recent University of Otago study suggested modern students are much less likely to drink at a pub than those in previous years.

Study lead-author Prof Kypros Kypri said he did not object in principle to the OUSA's decision to purchase the pub, but said it might struggle to draw the punters given the much cheaper alcohol available at off-licences.

''It might not be informed by the realities of the market.

''I wouldn't want to compete with Foodstuffs.''