Science educators off to Chathams 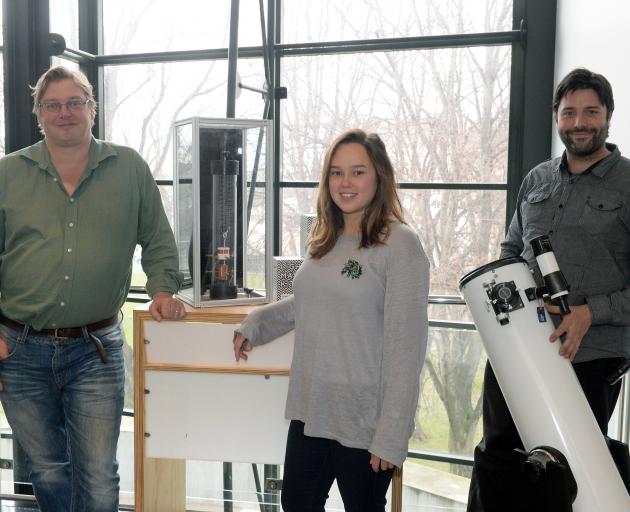 University of Otago physicist and Dodd-Walls Centre director Prof David Hutchinson (left), physics PhD student Maddy Cormack and Otago Museum science presentation co-ordinator Amadeo Enriquez-Ballestero at the museum. The earthquake seismometer (left) and 8-inch telescope (right) are similar to instruments being taken to the Chatham Islands as part of an educational initiative. Photo: Linda Robertson.
Chatham Islanders could be forgiven for believing they are living largely alone, in the most easterly part of New Zealand, more than 800km from the South Island.

But some visitors will be arriving there next week — a high-powered team of science outreach educators from the Otago Museum and University of Otago.

They will fly to the remote islands from Wellington on Monday  and return late next week.

Prof Hutchinson and Mr Enriquez-Ballestero said they were excited about  undertaking the "Extreme Science" project trip, backed by the Ministry of Business, Innovation and Employment’s Unlocking Curious Minds funding.

They aimed to inspire young school pupils on the Chathams with what science and technology could already tell them about their world, and potential employment prospects.

Museum science engagement director Dr Craig Grant said he also hoped the wider Chathams community "might see how new technologies can help offset some of the challenges of their remoteness, and enable them to take advantage of their unique location", such as linking the science of astronomy with night sky watching and "astrophotography" tourism.

Prof Hutchinson, of Otago University, stressed the expedition aimed "to build a relationship", and the funding included support for one of the teachers on the Chathams "to visit us back here at the university".

A telescope and seismometer would be taken to the Chathams and left behind with other science equipment.

The legacy was important, he said.

The team viewed this "as the start of a long relationship, not a one-off visit that is then forgotten".