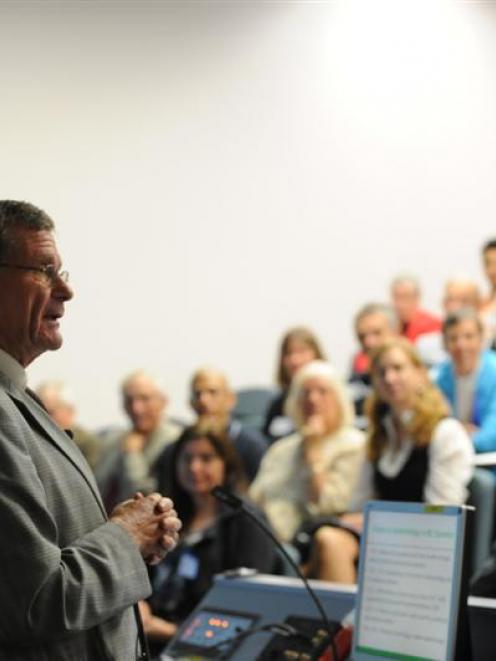 Emeritus Professor Robert Beaglehole speaks at the University of Otago at the weekend. Photo by Peter McIntosh.
It is disappointing more work is not being done to understand how pregnancy and breast-feeding protect women against breast cancer, leading University of Oxford epidemiologist Dame Valerie Beral says.

One in 10 women in the western world were getting breast cancer by the age of 80 and ways to prevent it had not been taken seriously, she told more than 100 people gathered at a symposium in honour of Prof Sir David Skegg in Dunedin last weekend.

If all women had five children, starting at a young age, and breastfed each child for two years, breast cancer rates in developed countries would be reduced by more than half, she said.

This was clearly not a practical solution, so what was needed was a hormonal vaccine which mimicked the effect of pregnancy and breast-feeding.

She envisaged some type of short-term exposure in early adulthood to one or more of the hormones involved with pregnancy and lactation which could offer life-long protection.

Research had shown that to afford maximum protection from the disease pregnancies had to be taken to full term.

Miscarriages and abortions did not reduce the cancer risk.

Dame Valerie said she considered prolactin, which is only produced in the later part of pregnancy, must have something to do with reducing risk.

Finding out more about this was not being taken seriously.

Whoever did it, and it could take a long time to work out the biological basis for it, "will get a Nobel prize", she said.

Large-scale animal modelling using combinations of hormones to see what worked would be needed.

While factors such as alcohol, postmenopausal obesity and hormone replacement therapy (HRT) - during the period over which HRT was being taken - increased the breast cancer risk, the number of lives which could be saved by avoiding these influences was much less significant than the number related to pregnancy and child-bearing.

Dame Valerie has led the one million-women study in Britain which is investigating how various reproductive and lifestyle factors affect women's health.

She paid tribute to the role of Prof Skegg as chairman of the Collaborative Group on Hormonal Factors in Breast Cancer which has pooled the analysis of data on international breast cancer studies. Former World Health Organisation director of the department of chronic disease and health promotion Emeritus Prof Robert Beaglehole was critical of the current standing of public health in New Zealand.

He praised the work of Prof Skegg as chairman of the independent Public Health Commission from 1992-95.

"If this commission had not been abolished, what a wonderful country this would be from a public health point of view," he remarked.

There was no longer any independent transparent advice on public health being provided to the Government and the chance of something like the commission being established now was "very, very remote", he lamented.

In his presentation about the perils of prostate cancer screening, University of Otago Associate Prof Brian Cox said he was still waiting for the Ministry of Health or the Urological Society to make a statement advising against having prostate specific antigen (PSA) tests for the disease more often than three- or four-yearly.

The test should not be done annually, he said.

He is critical of the reliability of the test and the fact that it over-diagnoses cancer by as much as 50%, leading to treatments which can result in chronic incontinence, impotence, or in some instances death, for a condition which might never develop into a clinical disease.

He ended his presentation with a quote from the man who discovered PSA, Dr Richard Ablin, who said the medical community must confront reality and stop the inappropriate use of PSA screening.

Doing so would save billions of dollars and rescue millions of men from unnecessary debilitating treatment, Dr Ablin said.

Other presentations at the symposium included the history and future of epidemiology, safety of contraceptives, circumcision and sexually transmitted infections, new patterns of sexual behaviour and the implications of public health, Samoan traditional birth attendants, and the millennium development goals in relation to population and family planning.

The symposium was part of the 125th celebrations of the University of Otago's preventive and social medicine department.