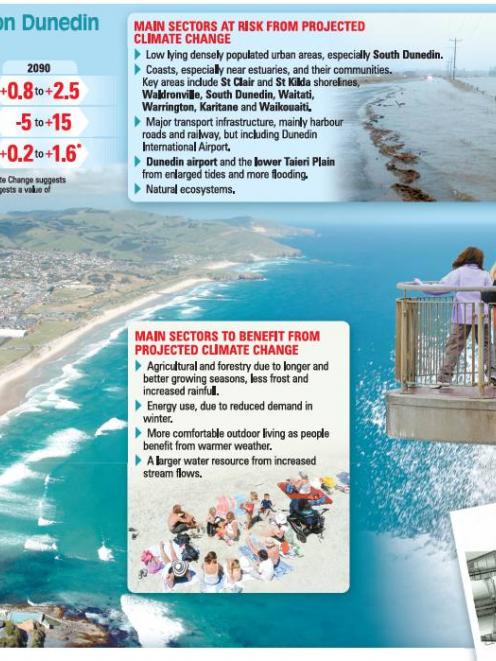 Dunedin could face some stark choices by the end of the century, with sea-level rise expected to force either the retreat from, or complete evacuation of, South Dunedin, St Kilda and St Clair.

The area has been identified as one of five "hot spots", the most vulnerable areas of the city.

The others are the harbourside; the lower Taieri Plain, including the Dunedin airport; populated estuaries along the coast; and the ecosystems of upland conservation regions.

[comment caption=Join the debate. Add your comment below]A report on climate change and its effect on Dunedin includes a prediction of an upper level for sea-level rise of 1.6m by 2090.

The result would be rising ground-water levels and salt-water intrusions in low-lying coastal communities, and ongoing anxieties about decreasing property values in South Dunedin.

"Surface flooding will become chronic in these areas as the 21st century progresses," the report, by University of Otago Emeritus Professor of Geography Blair Fitzharris said.

But the news in the report, commissioned by the Dunedin City Council, is not all bad.

Prof Fitzharris said yesterday there was time to adapt and mitigate, and some sectors would benefit from climate change, with longer and better growing seasons for agriculture and forestry, a larger water resource from increased stream flows, lower energy use and a warmer climate for inhabitants.

Dunedin's role was to leave mitigation - trying to reduce greenhouse gases - to "the big boys" of national and international governments, and concentrate on adapting to the expected changes.

"Anyway," he asked a press conference, "how hopeful can you be they will agree on anything after Copenhagen?"Predicting the upper range for sea-level rise was also "problematic", he said, with the most recent Intergovernmental Panel on Climate Change (IPCC) suggesting 0.6m, but more recent research suggesting 1.6m was a more prudent prediction.

"Unfortunately, the upper limits for sea-level rise are now more uncertain due to unknowns about future behaviour of Antarctic and Greenland ice sheets."The report was released at a media conference yesterday.

Council infrastructure services committee chairman Cr Andrew Noone said its point was to help build a picture of the effect on the city of climate change, adding to what the city had already built into its policies.

"There are positives and negatives, and there is time," he said.

Prof Fitzharris, who was a climatologist at Otago for more than 30 years, and a convening lead author for the IPCC, said he was not asked to do fresh modelling for the analysis, but tried to estimate what the climate might look like in 2040 and 2090.

There was uncertainty about the increase in temperatures, which would be dependent on levels of emissions, and "different models give different answers".

That would not mean a Nelson-style climate, as factors controlling the climate, like southerly blasts, would stay the same.

Westerly winds would increase in strength, with more frequent and vigorous frontal bands.

Rainfall would increase by up to 5% by 2040 and 15% by 2090, meaning drought incidence, expected to increase further north, should not affect Dunedin.

Natural eco-systems would suffer, with tussock grasslands, for instance, likely to be invaded by "shrubby species", and alpine species being pushed higher and higher.

The benefits to agriculture and forestry would be "quite significant", with the East Otago plateau likely to be warmer.

Prof Fitzharris said the council would have to make value judgements about the risks, and consider the role it should take.

"Even with concerted global action on mitigation, the impacts of climate change and sea-level rise will continue for the rest of this century."

Adaptation measures such as sand-dune enhancement, raising roads, pumping and drainage were available and would not need new technology.

"The city is going to have to deal with the impact one way or another," Prof Fitzharris said.

But the timeframe was lengthy, several generations, and measures taken as part of the council's normal work.

His recommendations included policy responses that gave most attention to adaptation, more monitoring of ground water in South Dunedin and at the airport, and protection of coastal dune systems.

Much of South Dunedin is at or below sea level, and was reclaimed in the 1800s from what was a swampy marshland.

Council city environment general manager Tony Avery said predictions were included in council strategies for, for instance, wastewater and infrastructure, an example being Portobello Rd improvements being designed so the road height could be increased over time.

There was a good degree of time to deal with South Dunedin issues.

The report would go to a council committee for consideration.