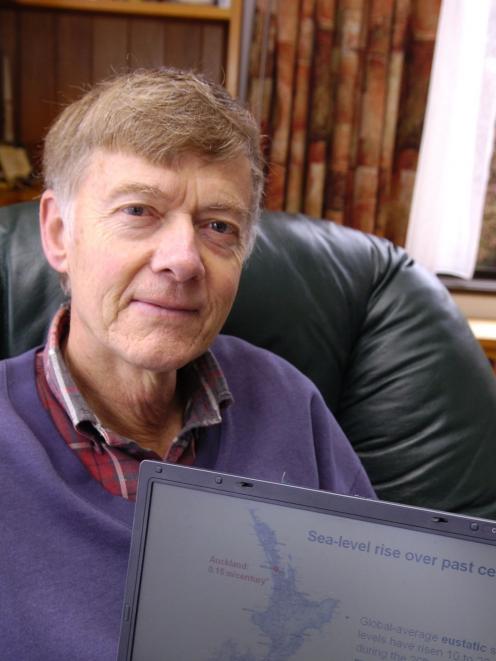 His research, carried out in conjunction with two others, indicates sea levels could rise by 0.5m to 0.8m by 2100, with the rise fairly consistent around the country.

While that matches predictions made by the Intergovernmental Panel on Climate Change, it is a more conservative estimate than what some have predicted.

In a report commissioned by the Dunedin City Council last year, University of Otago Emeritus Prof of geography Blair Fitzharris predicted an upper sea level rise limit of 1.6m for Dunedin by 2090 - enough to inundate South Dunedin, St Kilda and St Clair and affect the harbourside area, the lower Taieri Plain, Dunedin International Airport and settlements along the coast north of Dunedin.

United States physicist Dr James Hansen, dubbed "the grandfather of climate change", who spoke to an audience of 1000 in Dunedin in May, predicts sea-level rises of 5m globally by 2100, with 4m of that rise occurring between 2080 and 2100.

Prof Hannah and his research partners, Niwa principal coastal scientist Dr Rob Bell and Ryan Paulick from the former Auckland Regional Council, analysed data from numerous tidal gauges around the country and information from other sources to reach their conclusions.

Prof Hannah said this week the tidal gauge data, which stretched back 100 years for Auckland, Wellington, Christchurch and Dunedin, was "very robust" and enabled them to say New Zealand could reasonably expect sea-level rises of between 0.5m and 0.8m by 2100.

Also, the data did not show any recent acceleration in sea-level rise, he said.

Prof Hannah, who has been researching sea-level data for 20 years, is chairman of the International Institute of Surveyors' climate change task force.

He will talk about his research and its implications for Dunedin at a public seminar next week hosted by the Otago branch of the New Zealand Institute of Surveyors.

Speakers from the Dunedin City Council and Otago Regional Council will also talk about their preparations for sea-level rise and there will be contributions from an engineer and a social services manager.

The seminar, being held at the university's St David lecture theatre, at 7.30pm next Tuesday, was an opportunity for property owners, insurers, real estate agents, surveyors, planners and others to share and discuss information, Prof Hannah said.

Even though his sea-level predictions were lower than some other people's, sea-level rise would still have a significant impact on South Dunedin, St Clair and St Kilda by 2100, he said.