She said she was going to kill me, stabbed father says 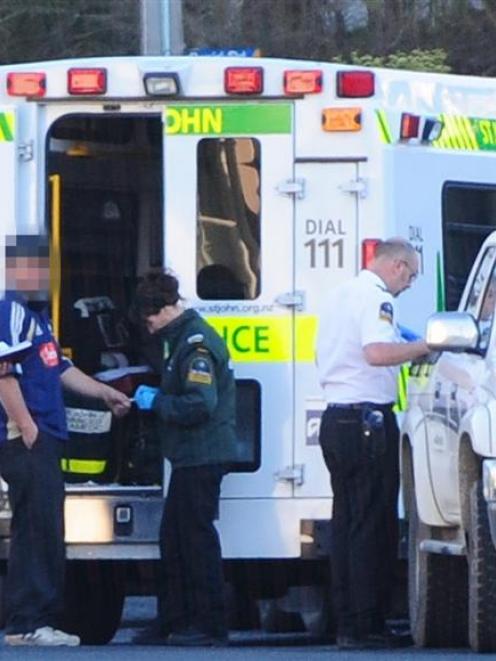 Ambulance staff treat the victim of a stabbing outside the Russell Street Nursery in Dunedin yesterday. Photo by Craig Baxter.
A young father stabbed outside a Dunedin child-care centre yesterday morning says his only concern was for the safety of his son and other families dropping off their children.

The man was stabbed twice in the arm with a filleting knife by a woman at 8.15am in what Dunedin police are describing as a "disturbing" and random attack outside the Russell Street Nursery.

He was treated at the scene for minor cuts to his forearm.

Resting at home yesterday afternoon, the 27-year-old man was still in shock when recounting the experience, and declined to be named for fear of retaliatory attacks.

He said he was about to unbuckle his 2-year-old son in a passenger seat and take him into the nursery when a woman approached and asked to speak to him.

"She kept asking why I had had a nose job. She wasn't making any sense."

Within seconds, the woman was yelling at him and began to hit him, he said.

"I pushed her away and tried to climb back in the truck. She slashed my arm twice as I pulled the door closed and she continued to stab the window once I was inside."

He drove down the street a short distance and then called the police before returning to the scene.

"Now that I've had time to think about things, I feel a bit freaked out about what could have happened," he said.

Pat Irvine, director of the Dunedin Community Childcare Association which owns the nursery and the adjacent early childhood centre, said the man's actions were heroic.

However, the man said he did not feel like a hero.

"The only thing I was worrying about was my son and the other folks.

"I'm pleased the whole thing played out out of my son's view."

Acting Senior Sergeant Chris George, of Dunedin, said every available unit was sent to the scene and the area cordoned off.

A woman was located at a nearby house shortly after.

"I think the situation could have been a lot more serious if he [the father] hadn't done what he did."

The woman was yesterday trespassed from the two centres, Ms Irvine said.

Access to the centres was limited for part of the morning, with only one point of entry.

A witness, who declined to be named, said she was counting her lucky stars and the incident could have been much worse.

"Scary stuff. I wasn't going to drop the kids off after that, but other parents were. At least it was a strong dad [attacked], not one of the pregnant mums."

A 39-year-old woman appeared before Judge John Macdonald in the Dunedin District Court yesterday charged with wounding a man with intent to injure him.

Tanya Monique Barclay (39), prostitute, was remanded in custody to Wakari Hospital and will reappear in court on September 4.