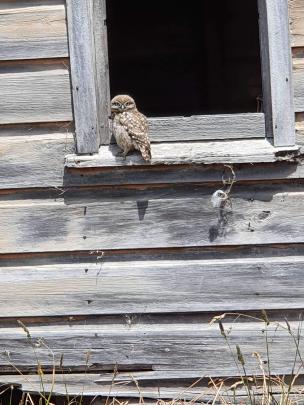 This little owl was recently seen at the window of an old barn at Hoopers Inlet. PHOTO: SUPPLIED 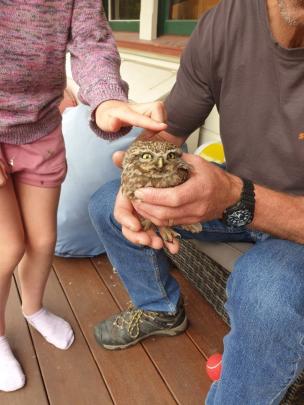 Outram resident Duncan Wells holds a little owl that was found inside the family house when they returned from holiday. PHOTO: ANNE-MARIE WELLS 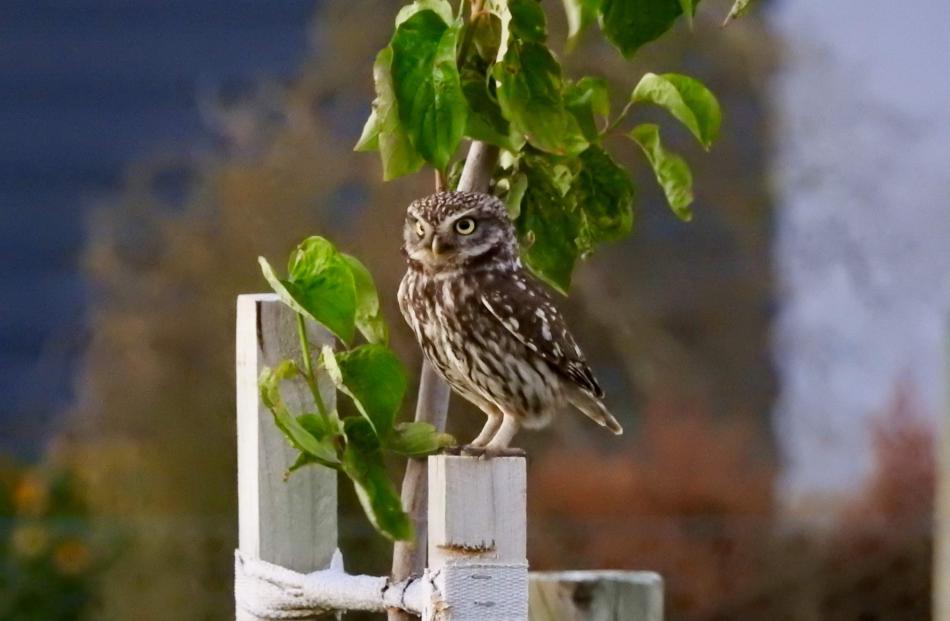 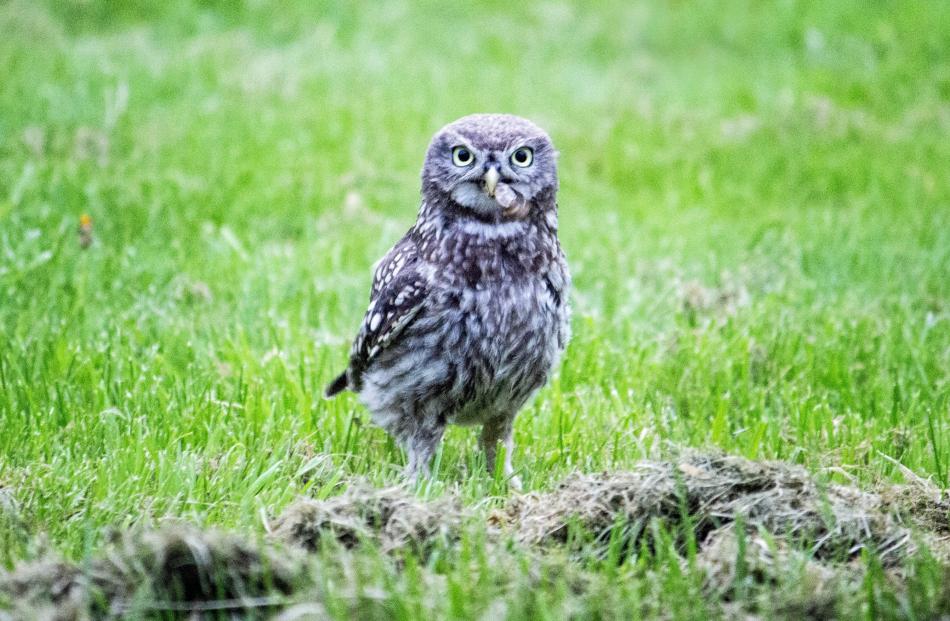 A little owl at a property south of Oamaru. PHOTO; TRACEY VICKERS PHOTOGRAPHY 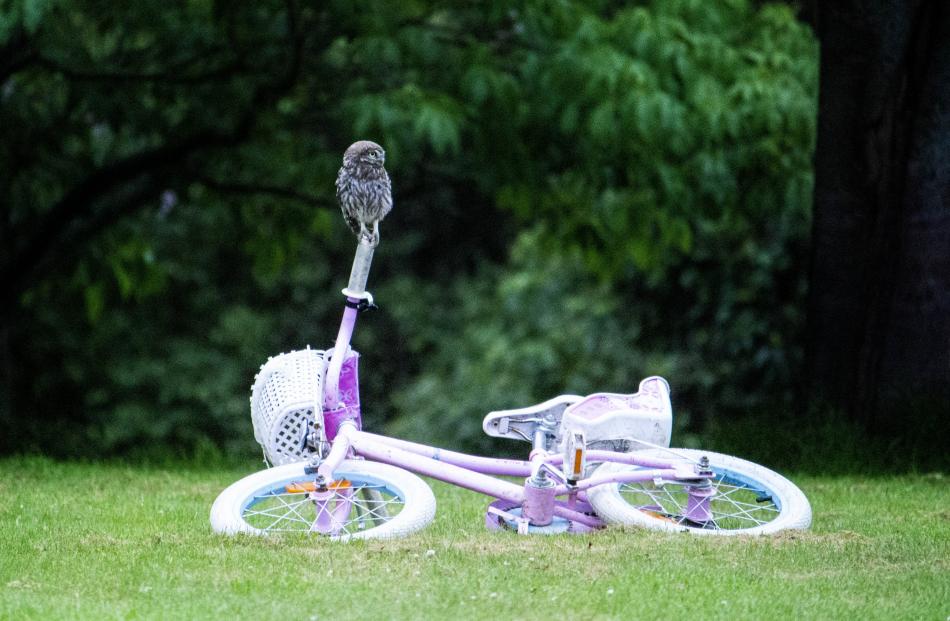 A little owl makes use of a children’s bicycle at a property south of Oamaru. PHOTO: TRACEY VICKERS PHOTOGRAPHY 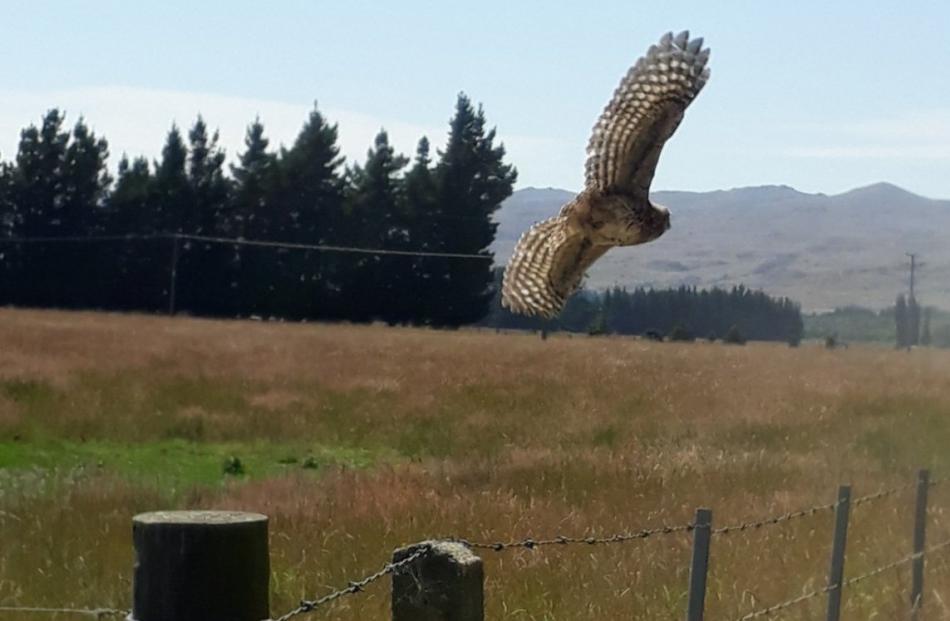 A little owl at a farm near Middlemarch. PHOTOS: BRAYDEN FOOTE

An Otago Daily Times article with a photograph of a little owl (Athene noctua) has caused a veritable owlvalanche of emails providing other owl photographs and sighting details.

Flying in from throughout Otago and Southland, thanks to more than a dozen emails, were tantalising stories about and photographs of little owls.

Among the many helpful readers was Leonie Robinson who said that five little owls visit her lifestyle property in Cromwell every night.

Her husband, Peter Robinson, said the owls had apparently been attracted by a larger-than-life size model of an owl designed to deter paradise ducks which had been fouling paths near the house.

This model had been sitting on a fencepost for a year and had apparently done a good job of duck deterrence.

However, the model owl had recently begun attracting five little owls who flew in and sat on nearby posts just before nightfall.

Dunedin zoologist Anthony Harris, who is an honorary curator, entomology, at the Otago Museum said this was "an amazing story".

After putting up the large owl, "few could have anticipated that result".

Several other families, usually in rural or semi-rural settings, reported seeing little owls, often in abandoned rural buildings, or occasionally on a tree stump, or in trees near farmhouses.

The Wells family said that when they returned to their rural property near Maheno after the Christmas break, they had noticed a little owl looking out from the inside of a window, having apparently fallen down the chimney.

They released the bird safely.

Photographer Tracey Vickers, who lives south of Oamaru, said she had recently seen a little owl perching on a children’s bike and children’s toys at the property.

The "very large response" to the article and photograph from readers had been "extremely encouraging", Mr Harris said.

As well as photographs, readers had also provided valuable notes on nesting sites, places where the little owls lived and were observed, and overall behaviour, he said.

"It shows that little owls are doing well in Otago and that fledglings like the one in the ODT are appearing over a wide area.

"This response is made possible only by modern technology, with cellphones and cellphone cameras," Mr Harris said.

The little owl was introduced in Otago and Canterbury, from Germany, between 1906 and 1910 in an effort to control the numbers of exotic small birds feeding on orchards and crops.

ODT illustrations editor Stephen Jaquiery photographed the initial bird as it was perching on the windowsill of an old building near Tunnel Beach Rd, in Dunedin, on Tuesday afternoon.

Mr Harris earlier said he had been keeping an eye out for little owls for about 40 years, but despite having found nests and other signs of the owl’s activities had made only one live sighting himself, 32 years ago.

Owls had for hundreds of years been much-loved birds.

The little owl was exactly the same species as the owl that represents Athena, the Greek virgin goddess of wisdom (Minerva in Roman mythology) and has been a symbol of knowledge and wisdom for over 2000 years, he said.

These birds were also naturally likeable and Otago people in general were very interested in nature.

This awareness was "a very good thing, considering that wild plants and animals are now in steep decline everywhere, world-wide, need our urgent support."