Snow to make way for gales 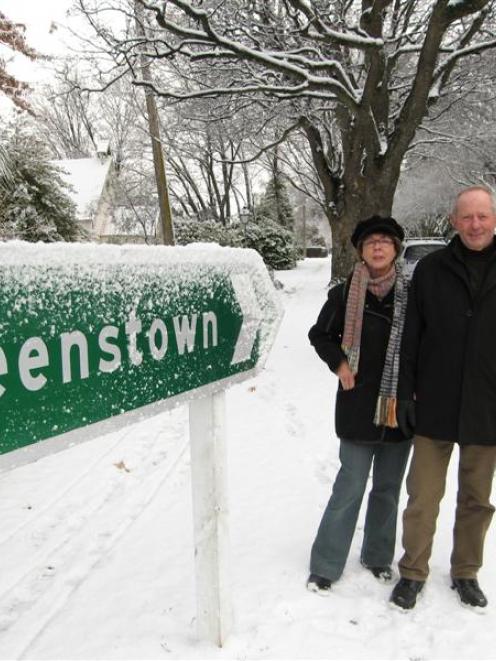 Undaunted...Arrowtown couple Ruth and Don Manley celebrated the early morning snow fall by going out for breakfast yesterday. Photo by Jude Gillies
The cold southerly winds sweeping across New Zealand are expected to move off tonight - and be replaced by gale-force westerlies.

Motorists have been advised to watch for ice and grit and to carry chains.

MetService forecasters expect the southerlies to move off tonight, and be replaced by squally westerly winds tomorrow.

Winds may reach severe gale force when enhanced by cold fronts moving onto New Zealand on Wednesday afternoon and Friday.

These fronts are also likely to be accompanied by brief periods of heavy rain.

"It's not good for travelling. People who need to travel this week should check the latest weather forecast and warnings, and road conditions."

Earlier, Dunedin Police Senior Sergeant Bruce Ross said all roads in the city were clear despite light snow falls in the hill suburbs.

However, it was a different story in Central Otago and the south. The Old Coach Road (SH93) between Clinton and Mataura has been closed due to heavy snow falls.

State Highway 8 between Roxburgh and Alexandra has been affected by snow and ice and motorists have been warned to drive carefully in the area.

The road between Omarama and Tarris (also on SH8) is also affected be snow and ice and chains are to be carried.

State Highway 94 between Te Anau and Milford is still open but drivers have been warned to carry chains.

Invercargill Police Senior Sergeant Olaf Jensen said there had been snow in Western Southland but there had not been any traffic problems or road closures in the Southland Region yet.

The Metservice has reported snow falling as low as 200m in Southland.

Heavier snow falls have now eased in the hills of Southland and Southeast Otago, but further lighter snow showers will fall until late afternoon which may add another 5cm above 400 metres on the Takatimu, Hokonui and Catlins hills.