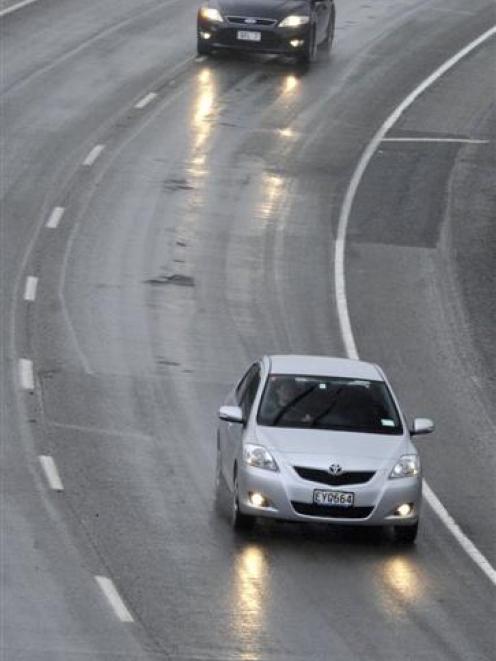 Motorists negotiate broken tarseal on the Southern Motorway, near Green Island. Photo by Matthew Haggart.
Highway maintenance budgets are being "stretched" in Otago and Southland as contractors have to keep clearing roads in the wake of two severe snowstorms this winter.

The New Zealand Transport Agency has a winter highway maintenance budget of $1,191,000, split among the three regional areas of Coastal Otago, Central Otago, and Southland.

The severity of back-to-back snowstorms in the past two months had created a lot of work for state highway maintenance crews and contractors.

"It's fair to say our winter budgets have been stretched," he said.

Territorial local authorities, such as the Queenstown Lakes District Council and the Central District Council, are compiling costs as they consider applying for "emergency re-instatement funds" from the NZTA to assist with their roading operations.

Mr Clarke said the sheer of amount of snow which fell in the recent polar blasts left highway pavements and roading seals around the region "saturated" - conditions which created ongoing problems for maintenance contractors to fix.

"There's certainly plenty of work for our pothole gangs," he said.

The saturation of highway and other road surfaces from snow and ice meant moisture leached into the pavement and created weak spots in the seal.

Chain-fitted heavy vehicles, such as snowploughs, graders, and front-end loaders, could often "chip up" road seal, which in turn created potholes in weakened road surfaces also subjected to a freeze-thaw cycle.

There was provision at NZTA for regional agency offices to apply for an emergency fund to cover additional roading costs for winter clean-ups "should we have to", he said.

A "pothole gang" of contractors had been assigned to remedy road seal damage in noticeable areas, such as the Southern Motorway, near Fairfield, Mr Clarke said.

The DCC was able to absorb the additional costs, although it would require modifications to other areas in its transport budgets, he said.

It was "not expected" the DCC would apply for any emergency funding from the NZTA "at this stage", Mr Hughes said.