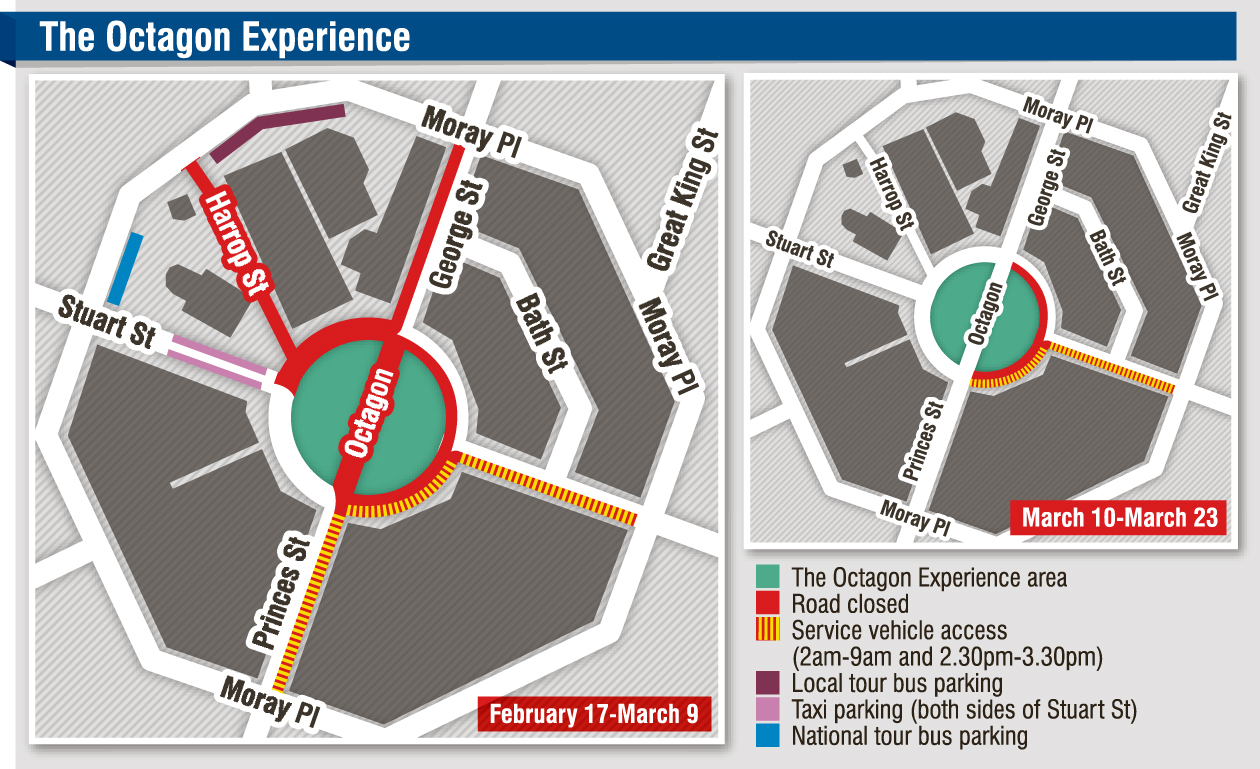 The heart of Dunedin is about to undergo a dramatic — but temporary — transformation into a more pedestrian-friendly space, ahead of the influx of thousands of music-lovers and sports fans to the Octagon.

But, as the Dunedin City Council urges people to give the two-month, $150,000 trial a chance, some Octagon business owners are still crying foul.

The "Octagon Experience" plan was announced in November, and would result in full and partial road closures in the area over the next two months.

That would include an almost-full vehicle closure of the Octagon, as well as parts of Princes, George and Stuart Sts, as far as Moray Pl, beginning on Monday and continuing until February 14.

Smaller partial closures would continue after that until March 23, and together were timed to coincide with a string of major events.

That included the opening of the New Zealand Masters Games village, concerts by Elton John and Queen, the Thieves’ Alley Market Day and the Otago Southland pipe band competition.

Council principal urban designer Kathryn Ward said furniture and trees in planter boxes would be added, as well as poetry displays, footpath decorations and other "place-making" elements, to create an area "that is vibrant and engaging".

Craft Bar and Kitchen owner John MacDonald said he supported the concept, if done properly, but what was planned would fail to deliver.

Octagon bars and restaurants had been denied permission to extend outdoor settings into the street, as they had done for New Year’s Eve, to boost capacity.

Without such extensions, Octagon bars would have a combined capacity for fewer than 1000 people, while trying to cater for thousands more Masters Games athletes — coming from an alcohol-free village — and music fans.

"We won’t be that happy if there’s thousands of people queuing and we’re all being roundly abused."

Consultation over the plans had also been "disastrous", Mr MacDonald said.

"A lady from planning turned up on my door, handed me a piece of paper and said ‘This is what’s happening’," he said.

Sue Todd Antiques owner Sue Todd, whose shop is near the Octagon, said she had not been consulted, despite expecting a major downturn in trade during the trial.

While the events would boost foot traffic, it was not the kind that was good for business, she believed.

"I’m not against progression.

"I’ve been in business for 30 years ... I know what happens every time the Octagon gets closed down. I lose trade. I know what’s going to happen."

A council spokeswoman said the more than 75 businesses had been informed of the trial in November, and, while some were "unhappy", many agreed to support it "in principle".

Licensees were also able to extend their premises, but not on to the street, which needed to be kept clear for emergency services, she said.

"The only way we’re going to find out what really works well and what doesn’t, what people like and what they don’t, is by trialling various things."

He dismissed critics with a "default grumpy mindset" and said staff were working "really hard" to make the trial a success.

"And, for the life of me, I can’t see why any [business] ... would think it’s a bad thing to have more people in their immediate physical environment."

A series of surveys and data collection by the University of Otago Schools of Entrepreneurship and Sustainability would also be used to monitor the trial’s success.

Oh, I don't know. They might be a bit lively, and not from here, ducking down the alleyway.

This is a trial that is never going to work and in the process will almost certainly condemn the future of some businesses that are set up in and around the area. The down-side effects of this decision have already started to take affect with the removal of the Dunedin Octagon Market which attracts thousands of tourists over the summer months. The market will now be held indoors at various venues but gone will be the hustle and bustle happy carnival type of atmosphere that it has brought for 27 years. Every city needs a market. The Masters Games happen every 2 years, what then? Concerts are a one night happening. Don't count on the locals filling up the Octagon it won't happen. Dunedin is simply not big enough. This is a trial set to destroy.

Most likely the Octagon and its surrounding areas will be a good place to shy clear of whilst this so called "Octagon Experience" is going on...

"We won’t be that happy if there’s thousands of people queuing..." The brightest business brains in the city

You have to love the DCC. There is no limit to the amount of ratepayer money they will waste in pursuit of their personal desires. They just want to ban vehicles and seriously curtail alcohol sales, no matter what the public wants.

Yeah, nar, let's just wait and see. I for one, and my family will go down the Octagon on a few occassions, we'll buy things, we'll eat things, we'll sit on seats and we'll watch things. Might be........nice........just sayin. Maybe we all could.

"Council planning and environment committee chairman Cr David Benson-Pope also defended the trial yesterday","He dismissed critics with a "default grumpy mindset" and said staff were working "really hard" to make the trial a success". Pretty typical of this 'council', shut things down to suit themselves and declare those opposing it as "grumpy" and spend ratepayers money while doing so. You are not allowed an opinion that differs from them.

Can someone please explain to me why so many people and especially the shop owners are so negative about this. I really don't understand this at all. Everywhere around the world pedestrian zones are the prime location for shops. Cars don't buy anything, people do! Being able to drive by a shop does not mean more people go into that shop and buy stuff, especially in a area like the Octagon and George Street where it is almost impossible to get a parking spot at any given time. But when you have a lively pedestrian area people linger, have time to look at shop-windows and will eventually buy stuff. Why on earth should this not be the case in Dunedin when it works EVERYWHERE else????? The Octagon is such a beautiful area but no one can enjoy it at the moment because it is loud and stinky and not safe for families with all the traffic. Please, please, please DCC don't back down and don't listen to all those who live in the past and have probably never left Dunedin and have no idea whatsoever how wonderful a car-free inner city can be!

Why make it so complicated, surely you just close the centre and then all traffic just goes round. if that's not enough, close everything off from moray place make moray place one way and allow deliveries to businesses at certain hours of the day.
Keep it simple