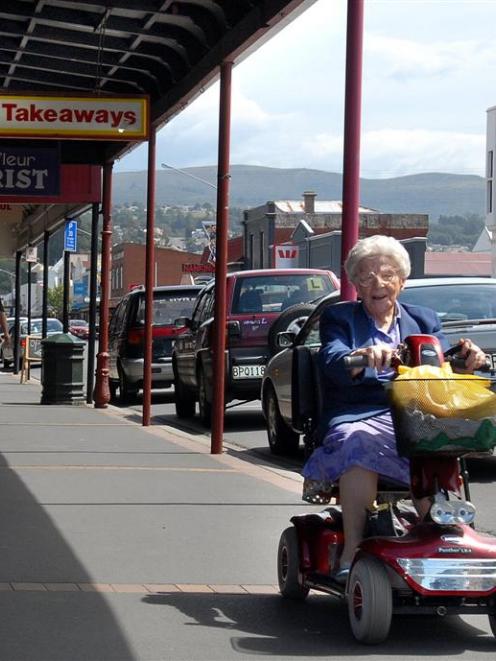 The main street of South Dunedin. Photo by Gregor Richardson.
Like an often-repeated New Year's resolution, plans to revitalise the South Dunedin shopping district are back on the agenda. Chris Morris reports in the first of a new Otago Daily Times series, Suburban Issues.

A stroll through the streets of South Dunedin can, for some, reveal a tale of two cities.

On one side of the fence are the small independent stores, musty second-hand dealers, small restaurants and takeaway shops.

The streets are a mishmash of faded and dilapidated signs and facades, and customers meander through the stores, pausing for a rummage and a chat, before wandering off along the street.

Around the road is a collection of monolithic stores - the Warehouse, Pak' n Save and Mitre 10 Mega - with their brightly coloured, yawning entrances swallowing hordes of eager shoppers and their trolleys, day and night.

These customers come with a purpose - they drive in, shop, and leave, often as quickly as possible.

The result can be two quite different takes on the tale of this suburb - one that sees the shopping district as a quaint throwback to an older sort of New Zealand, and another that sees nothing but a slum.

And, if statistics tell a story, the tale of South Dunedin is a sorry one indeed.

The short version goes something like this - residents are slowly drifting away, and, of those who stay, more are older, unemployed, less educated, and earning less than the average for other centres across Otago, according to 2006 census figures.

It gets worse the more detailed the scrutiny - unemployment, at 9.8%, was double the 4.5% average across Otago, while 44.4% of people aged over 15 years boasted no formal qualifications whatsoever, compared with 23.7% across Otago.

So bad are the 2006 Census figures, the Ministry of Health last year named South Dunedin as one of the three poorest areas in the South Island in its Atlas of Socioeconomic Deprivation in New Zealand.

And it's a story that's been told before, all too often followed by the familiar refrain of: "Something must be done".

There is talk of rebirth, of bringing in new businesses, galleries and art studios, of plans for the Carisbrook site - should the new stadium ever be built, and the old one sold - and of the need for paint . . . lots of paint.

Dunedin city councillor John Bezett, of the South Dunedin ward, is one who supports the talk, albeit with a note of caution.

"South Dunedin, I think, does need some special attention," he told the Otago Daily Times.

The council had been lobbied to do more for the suburb, most recently by South Dunedin resident - and former Dunedin mayoral candidate - Tracey Crampton Smith at a public forum in December.

As a result, a special forum on South Dunedin was planned for later this year to discuss regeneration initiatives, which could lead to a host of projects being pursued by the council and the community, Cr Bezett confirmed.

However, Cr Bezett conceded it was not a new idea - previously, "quite comprehensive" forums had been staged about six years ago - and any talk of redevelopment in South Dunedin had to be handled sensitively, or risk alienating sections of the community.

"Some of the businesses get quite concerned when people are saying `the run-down state of South Dunedin' . . .

"It does have character and it's important that character is retained. It's like a heritage precinct and I would not like to see that lost," Cr Bezett said.

Ideas up for discussion included more landscaping, plantings, park benches and other beautification projects, and there was already "several hundred thousand dollars" in council funds available for that type of work, he said.

The council was also looking for land or a building to house a new South Dunedin library, money for which was included in the council's 2012 budget, he said.

However, an ongoing five-year battle to install new public toilets in the South Dunedin shopping district - which has been stymied by opposition groups - was an example of how complicated the issues could become, he said.

"It's not just a case of someone going out there with a pot of paint and doing up the front of a shop . . . If there isn't a will from the people there to do something, it becomes more difficult," Cr Bezett said.

Ms Crampton Smith's submission to the council's public forum in December argued converting vacant shops into artists' studios and galleries could be one way to breathe new life and vibrancy into the shopping district.

South Dunedin was a significant commercial area "and yet it's the dowdiest", she said.

New arrivals could help create a new economy in an area that looked "tired, shabby and in need of a facelift".

She was not alone in her opinion - pointing to the results of a recent residents' opinion survey, which showed 40% of respondents were dissatisfied with South Dunedin's overall look and feel.

Dunedin South MP Clare Curran also picked up on the theme in her election campaign, when she surveyed people for opinions on South Dunedin, Caversham and the future of the Carisbrook site, should the planned $188 million Otago Stadium go ahead.

There were "huge opportunities" for development in South Dunedin, but the issue needed a community-led discussion beginning with a forum and, possibly, the formation of a new community working group, she said.

"I would like to see that part of Dunedin become more dynamic and interesting and alive.

"It's an iconic part of Dunedin and that's why I stress the importance of community involvement and consultation," Ms Curran said.

She was also planning a market day or street festival to add life to the area, and would consult with members this year to gather more ideas.

Mrs Orbell, who manages the Salvation Army store on Great King St, said large department stores like the Warehouse had been positive for the surrounding shopping district, but she believes more chain stores would not necessarily be good for the area.

The remaining independent stores, and the community feel of the area, needed to be protected to ensure a vibrant shopping district, she said.

Petone, in Wellington, was an example of what could be achieved.

"I'm very positive about South Dunedin. I chose to work here because I love the different sorts of people that come to South Dunedin.

"I feel where I work is like a community - everyone knows everyone else, and that's special . . . that's what we don't want to lose, really."